MIDD Wins Both in Maine

It was a long, and rainy trip over to Lewiston, ME, but we made it. When we arrived, we got to watch the last game of Amherst beating Bates, and then took the court ourselves to face the Mules of Colby College. We did have a couple of friendly faces as both MJ's parents, and Meg Anderson's mom made the long trek to ME to cheer us on. Also, a fellow MIDD Alum, Heidi Howard Allen (who is now married to the Bates head coach greeted us as she watched her husbands team play Amherst. She was allowed to cheer for us on Friday night against Colby!) 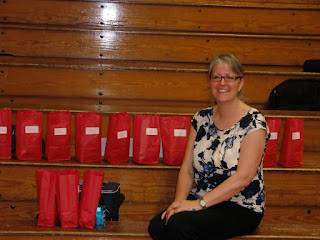 We started out well, winning the first game. We got off to a somewhat slow start, trading points and trailing by a few points early in the game, but finished strongly to take it 25-17. The second game, however, we got off to an even slower start, and didn't quite have the rally in us, it seemed. Colby was a very scrappy team, and despite not having a lot of power in their offense, they found some areas of the court that were open, and took the game 21-25. We seemed to be trying to help them out by serving out 9 times in just 4 games, but we did bounce back to win the last two games 25-18, and 25-12. In the end, I think our offense was just too much for them. Three people had double digit kills with MJ, Julia and Jane all posting 11. Elissa had a great hitting percentage with 5 kills on 12 swings, and no errors.

Defensively, we had four people with double digit digs. Jane and Lauren each had 19 digs, with Caitlin and Julia having 18, and 16 respectively. They were attacking our right side defense more than usual, it seemed, with Lauren and Julia combining for quite a lot of digs. Whit came through on the blocking front in a big way with 4 solos, and 2 assists to lead our defense at the net, while Elissa had two a piece.
The next day the sun broke through, and it was an absolutely gorgeous day. We played the late game (1:30), so we were able to sleep in, get a good, hot breakfast buffet, and had a leisurely morning enjoying some time just sitting outside the hotel before departing for the gym. Several people didn't like the coffee at breakfast that much, so we had decided to stop at a Dunkin Donuts on the way to the gym. Fortunately, we were preparing to stop there, because our bus stalled, and we coasted to a stop right in front of the DD. People filed off to get their coffee, while Andy our bus driver frantically started calling the home office etc. to see what could be done about our bus situation.
Long story short, after stalling out several times on our way to the gym, which was only about 4 or 5 miles from the hotel, we made it, and Andy topped off the coolant, and drove it around while we watched the end of the Amherst-Colby match. He assured us by the time we finished, we'd be all set to get home safely.
We let him do his thing with the bus, while we prepared to play Bates. I don't know if it was the excitement from the bus, the iced coffee, or just good preparation in general, but we were pretty sharp from the initial serve. Our reactionary defense was about as good as it's been. They didn't have a lot of offense, but they came at us with several types of shots, and we just were alert, and ready and kept odd deflections in play, and regrouped when out of system, and pretty much dominated from start to finish. We subbed several people, and our level of play stayed very consistent, which was great to see. 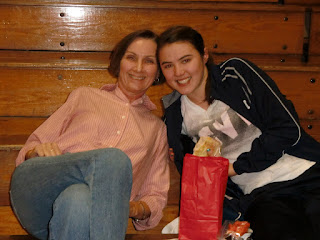 Elissa had another great hitting game with 8 kills and no errors on 18 swings. She was followed by Jane with 7, Amy and Julia with 6, and MJ and Stud with 4 and 3. Whit again had 2 solo blocks to lead the defense at the net, while Caitlin again led our floor defense with 17 digs--she leads the Conference in Digs/game. Charlotte Ching came in and served well against Bates, and played some great defense as well. Lauren had over 10 assists a game which is a stat that currently leads the Conference. Also, Julia added 5 more aces to her impressive total of aces as she is among the leaders in the Conference in Aces.
In addition to our bus excitement, we had a fun lunch prepared for us by MJ's mom. She had asked if she could get us lunch, which was great, so we enthusiastically said, sure! By the time the team returned from the showers, there were 18 individual bags lined up in the bleachers with names on them. In each was a sandwich, a drink, chips, some healthy treats, and a couple of fun treats for dessert. How fun. Thank you, Angela! (Fortunately, we didn't end up needing them to shuttle us from our broken-down bus to the game 4 at a time, as we were thinking we might have to do at one point earlier that day.)

Notch up a couple more Conference wins for us, but truth be told, we have some tough ones coming up! Unfortunately, Bates and Colby are not two of the tougher teams we'll face in Conference. This weekend Bowdoin and Tufts come to our gym for our next round of Conference games, and we're looking forward to a good challenge with both of those matches. To top it off, it's Parents' Weekend, which is exciting as well. This is the time of year when teams generally feel like they're putting it together, and we're looking forward to testing our skills against both teams! We played Bowdoin earlier in the season, but this one is the one that will count toward the Conference Standings.
The Friday night 6pm match with Bowdoin will be webcast, but if you want to see our Tufts match at 1:30 the next day, you'll have to come in person to Pepin to catch the action! See you there.
Posted by sjr at 2:57 PM