It's always fun to hear from Alums, and pictures are always welcome as well! Not too long ago, senior Kate Heath was visiting her sister, Amy Heath in Washington, DC, where they had dinner with Lexie Fisher. Sushi, I was told, was on the menu. We've discovered that sushi is a favorite among many members of the team, so if there's an alum out there who wants to come back to MIDD, but you're not sure what to do, come back and start a sushi restaurant in town!! We need that here in MIDD, maybe even a Sushi/Thai restaurant?! 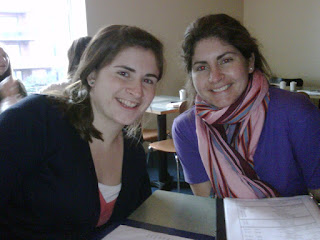 Recently, I've also heard from Georgia Jolink, who ran in the Boston Marathon recently. She was fundraising for an excellent cause, the Children's Hospital of Boston. She said that being a part of the Miles for Miracles marathon team was "really inspiring" for her. Here is a brief part of her account of the race:

"I was wearing a singlet that said Children's Hospital on the front, and before the race, I had written my name on my singlet and down my leg, so between yelling for Children's and yelling my name, the fans really helped. I never thought that people I had never met before could encourage me so much, but the barrage of cheering was almost constant for the last several miles.When I hit the "One Mile To Go" sign somewhere on Commonwealth Ave, I picked up the pace a little bit and just went for it. My legs were hurting, I was dodging people right and left, people were racing past me, the crowd was almost deafening, and once I turned onto Bolyston and saw the Finish Line, I thought about all of you and how the race was about something greater than just running."


Georgia ran into Lacee Patterson and her mom, who were both running in the Marathon as well, and they were able to share a pre-race dinner Sunday night, which sounded very nice! Apparently, Georgia and Lacee were very near each other in the final mile of the race, but I won't say who came in first...I will say that it was reported to me that despite a pulled muscle, Susie Patterson was still out there to finish the race--amazing, but par for the Patterson course, I think! :) Way to go all of you!!

Lindsay Patterson has been in touch, and is very happy working for the Buddy Program right in Aspen, and she is very active in all parts of the organization, which has been rewarding and exciting for her. She's also been coaching youth volleyball, and this is what she had to say about that recently: "I just started coaching my first volleyball team! I'm trying to remember how I learned to pass/set/hit etc. as I teach these 4th, 5th, and 6th graders. It has been really fun (and challenging!) as we are only in the 2nd week of practice. I have about 14 kids, which can seem overwhelming when I'm trying to teach how to serve and balls are flying right and left! I forgot that we learn the under hand serve before the over hand serve for a reason! Anyways, it has been fun to keep my foot in the volleyball world now that my "career" is over, and I do love working with the kids. So, Tuesday I'll be back in the gym!"
Karen Engler Bartlett is living here in town, so I run into her quite a bit. She lives in Cornwall with her husband and two children, Khalen (2) and Julia (5). Believe it or not, she and I both have children in the same pre-school! How fun is that?! Karen has agreed to co-write our letter to alums this fall encouraging attendance at our Alumnae Game on Homecoming this year, so stay tuned!!


Thanks for the updates, all of you. Anyone out there who wants to catch us up on your life, please let me know. I think I have other news from Holiday cards that I'll go through again and get some other alumnae news out there. It's time to reunite alums--so please think now about coming back for Homecoming next year, and stay tuned for our letter in the mail!!

Thanks to Natalie for keeping in touch while abroad in South America this semester! Here is an update from her, in her own words. Sounds like she's having an amazing time, but there may be more talk of futbol games than studies?! :) 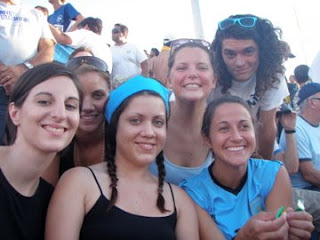 These are excepts from her email:

"whatsup yall?! long time no talk, but Happy Easter! eat some chocolate for me because i'm really missing fatty snickers. i went to santa fe, argentina again with my family and Clare Zutz (a midd friend) and we spent the day at my gma's house in Sauce Viejo. we had an asado of course and played volleyball and a crazy version of poker called truco, that i still have no idea how to play. and we danced a little...[utube video available if you ask her for link!]..." 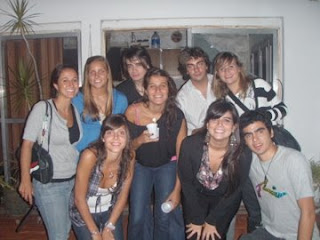 "life here in uruguay has been really awesome so far! my uruguayan family is turning out to be more than i expected. last saturday we went to the southeastern coast of uruguay (la paloma, punta del diablo, cabo polonio, and more) and got to see amazing beaches and hippies, which was awesome! we saw the one and only recycling can in cabo polonio where only 80 hippies live (sorry this sentence sounds awkward... my english is getting worse and i'm not so sure yet that my spanish is compensating for it...). but it was sick and if any of you all come down, we'll def go 'cause it's my favorite place so far in uruguay. our exchange group also got to go to the World Cup Qualifier game with Uruguay and Paraguay and uruguay won 2-0!!!!!!!!! SOOOO FUN! and i definitely fell in love with soccer, and #10 diego forlan who plays for Atlético de Madrid : ) " 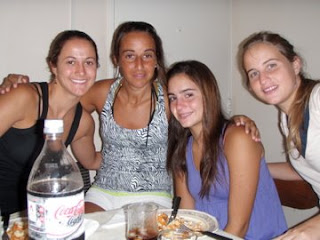 "on a less fun note, i like my classes a lot (modern uruguayan history and democracy and dictatorship). but because uruguay has never been important in the world, i have no clue about what they are talking about. so i'm trying to read more about uruguayan history before i go to our 3 hr-long classes! yeah sooo long, partially because most of the time to say one thing in the spanish language takes double the time than it would in english (another terrible sentence--sorry). and also because there is absolutely no class structure and students talk whenever they want. OH and our classes are essentially half 30/40 yr olds and a few young uruguayans. so i havent had the greatest luck friending natives, but then again we've only been taking classes for 2 weeks! but the professors are incredible and pretty nice to us foreigners." 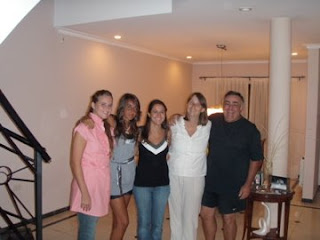 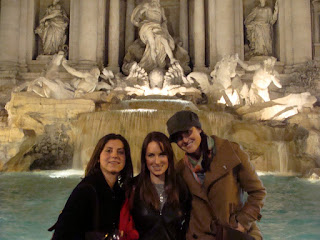 Our juniors (or sophomore Febs) have been great about keeping in touch with us here at MIDD this spring. Here is what Whit had to say recently about her semester in Italy! This is in her own words, which is much better than me trying to recount her tales!...

"I thought I'd send an update about life in Italy...

So for the month of January, I just traveled a lot. I got into Florence January 4th after a 14-hour delay in Chicago (we planed & de-planed a total of 3 times) and went to see the David, the Boboli Gardens and mostly just wandered. Then I did a pretty whirlwind tour...I went to Paris, Edinburgh, and Copenhagen, and made it back to Italy for the start of our semester here. Since then I have mostly remained in Italy except for one weekend in Prague.

Ferrara is a pretty small town, where I believe there are more bicycles than there are people, but it's very friendly and not very touristy so we get a lot of Italian practice here. It was a medieval town, so there is a large castle in the center of town, complete with a moat! There is also a big stone wall that surrounds the old part of the city, and it's a great place to walk/ run around and see the city. I am living in an apartment close to the wall with an 2 roommates, one Italian girl, and one English girl, and I love them both! Our apartment is cute, small and cozy...and the ceiling of my room slants so that I can only stand up in the doorway, but I don't mind! I am most definitely very tall here...France and Italy especially...I blended a little better in Scotland.

In general, Italy is wonderful...the people are all loud and friendly, and they are serious about their food...they love pasta and pizza! Our spring/ Easter break is coming up, so we are doing a 10-day trip to Scotland, Germany, and Ireland!! I am soo excited to see Dublin and Galway!" 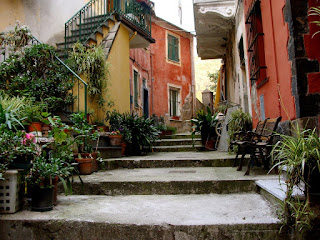 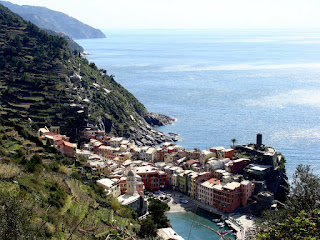 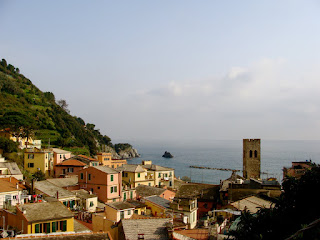