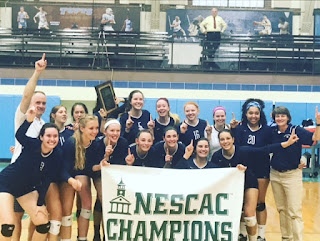 NESCAC Championship weekend--what FUN!  We had to start out by beating Bates in the Quarterfinals after having lost to them just a week before.  It was a very tough match, as we expected, but our defense was much improved from the first time we played them as we out-blocked them, had almost as many digs, and hit .241.  Becca had a career high kill night with 22, and Hannah had career high digs with 27.  Alice had a match high 6 blocks while Mel had 5 and Sarah had 3 to double their team blocks 12-6.

Because we'd played the early match as the #2 seed, we were able to both watch a bit of the 3vs6 match, and go out to dinner at a restaurant, which was a nice treat.  Our Conference weekend matches are set at 8pm on Friday nights, so we never go to a restaurant afterward because it's so late, which was very nice! 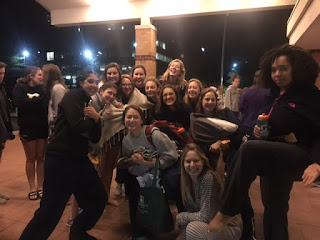 After dinner, we headed back to our hotel for a good night's sleep.  A little before midnight, however, the fire alarm went off and we all had to evacuate the hotel for about 20 minutes or so until they could give us the all-clear to go back inside.  Some were already in bed, or at least ready for bed and thus decked out in jammies and no socks/shoes outside!  Nothing holds back a Panther, though, and the next morning we were up and ready to face Amherst!

We were on a roll for the Amherst match, sweeping them 3-0, and were really clicking with our offense as we hit .281 and held very slight advantages in digs, aces, and blocks.  The first and third sets were tightly contested while the 2nd set we ran away with a little more.  We found ourselves down late in both of those tight sets, and had to come from behind for the wins.  We trailed 17-19 in the first, going on a late surge to win 25-22.  Up 2-0 in sets, we got behind in the 3rd set early 8-14, but pulled even at 20-20, and then traded points a bit before scoring the final two points for the 3-0 win 25-23. 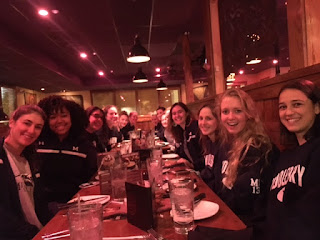 We were headed back to the finals for the first time for anyone in this group, and thus earned another dinner out, which was great!  We could get used to this!  We stayed at a different hotel Saturday night and found an Outback Steak House to eat at near our hotel.  Another good night's sleep, and we headed back to Tufts for the Championship match on Rose's birthday!! 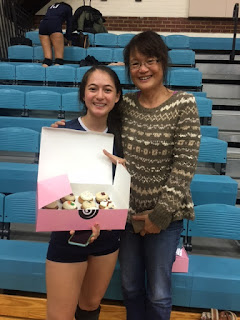 Our Field Hockey team was also at Tufts for the weekend playing in their NESCAC Championship also.  It was fun to see them and wish them well in their final also.  It's always nice to have one of our MIDD teams at the same location as us, so GO MIDD!!

The final vs Tufts was a great match.  When we lost to them in 5 sets earlier in the season, we knew then that we'd love to have a re-match on a Sunday (which would mean that it would be the NESCAC Finals), and that's exactly what we got!  Tufts was currently ranked #1 in New England, but that didn't stop us from believing we could win!  After all, we'd already beaten a #1 Team in the region when we beat UMass Boston in early October.  We started out in our 5-1 offense as we had for the last couple of matches because it had been working very well.  Not so much on this day, however, as we lost the opening set 25-14!  We quickly transitioned to our 6-2 and took the next two sets, both by scores of 25-19 to take a 2-1 lead in sets.  The 4th set was another tight set but Tufts edged ahead late to go up 19-24.  Faced with 5 set points, we sided out, and sent Emily to the service line, still down 4 set points.  We fought back and there were many long rallies as we tied it up 24-24 on Emily's serve, only to go down a set point again, and then lost the last point on a joust at the net. 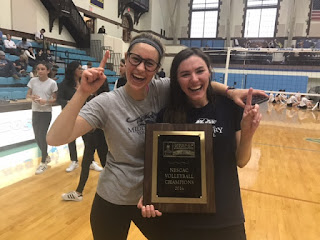 So, we were on to the 5th set.  The Championship match has gone to a 5th set the last couple of years, and that just shows the parity in our Conference.  Tufts jumped out to early leads of 5-2 and 10-6 in the 5th set, but we just remained calm and kept fighting to chip away at the leads, as we had all weekend, and all season, really.  Down 6-10, we surged ahead with a combination of big plays by us and some attack errors by them to take a 13-11 lead.  They had one more attack error and then a double block by Eliana and Melanie sealed the Championship for MCVB!!  Here's a quick video of match point taken by one of our faithful MCVB family members! 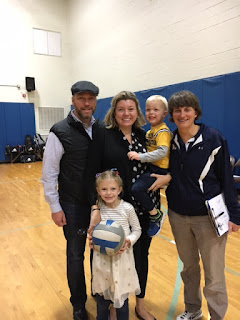 By the time the 4th set rolled around, the Field Hockey game had ended and the gym started to really fill up, making for a loud, great atmosphere for the 5th set!  Our field hockey coach later told me that she didn't realize that we only played to 15 in the 5th set and was very happily surprised when it just ended 15-11 and we all rushed the floor!

Our super fans, Kathryn '16 and Meg '14 were there to cheer us on all weekend, as were other former players/parents Katie Kenney Enslin '03 and family, and Tim and Lisa Barrett P'11, P'13.  It was a thrilling finish to a great weekend, and the team, although ecstatic about the win was quite honestly exhausted afterward, as you can see from the post match picture waiting to load the bus home. 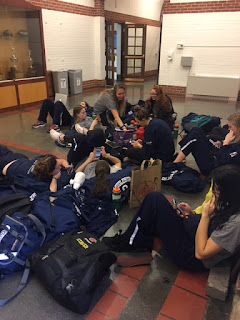 It was fun to get messages from alums and even a couple alum parents leading up to NESCAC's and again after winning our Program's 5th Championship!!  Thank you ALL for the wonderful support!!  GO MCVB--headed back to the NCAA's!!
Posted by sjr at 9:09 PM No comments:

Alum Meg Anderson Spends Yet Another Birthday with MCVB 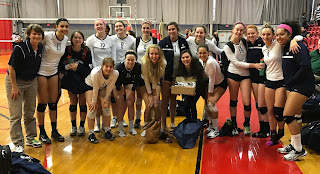 I can't believe I forgot to include this in our recent blog entry.  The birthday weekend in question as a whole was a bit of a bust; however, a highlight for sure was Meg sharing her birthday (and, let's be honest, her birthday CUPCAKES) with us when we were at MIT a couple weekends ago!  Happy Belated Birthday to Meg on Oct. 22.  For four years while Meg was playing at MIDD we were at the Hall of Fame Tournament.  Then, she spent two more years with us as a coach, and I think two years ago we were still at the HOF, and last year and this year we were at MIT.

Looking forward to seeing her again this weekend at Tufts when we start our quest for another NESCAC Championship Friday night at 5pm vs Bates!!  GO MCVB!!

(For any alums reading this, even with the #2 seed, we still play on that little upstairs court at Tufts with the half walls separating the court from the hallway!!)
Posted by sjr at 11:38 AM No comments: 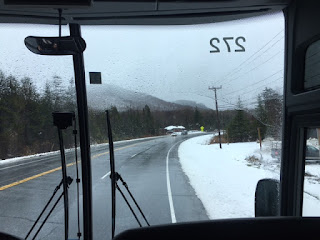 Our final weekend of the regular season took us to Maine to play both Colby and Bates.  Colby has been struggling this season, and posed no real threat as we cruised to a 3 set sweep on Friday night by the set scores of 25-15, 25-21, 25-15.  We did meet up with our first "real" bout of snow as we crossed over the Killington gap on our way over, which is where we met our first flurries of snow the previous weekend on our way back from MIT, so winter is on it's way after a gorgeous Fall.

The next morning we headed to Bates to play our regular season finale, after our stop at Dunk, of course.  The fun thing in Waterville was that there was a Tim Hortons just a couple of stores down from the Dunkin Donuts, which made Claire VERY happy!!

Onward to Bates, where we met more than our match that day.  They were super pumped up for senior day, and they even gave our seniors flowers, which was a very nice touch and much appreciated.  Bates came out on fire, and dominated the first set scoring 5 points in a row on two separate occasions for leads of 11-5, and 20-10 to eventually take the first set 25-11.  The second set was more back and forth, but they were still scoring points in bunches whereas we were just getting one at a time, for another lopsided set score of 25-15.  We seemed to find a groove in the 3rd set, jumping out to a 9-3 lead, and expanding it to a 20-10 lead before a late surge brought them to 24-16, when we closed out the set on a kill by Sarah.  The final set was unfortunately marked by point runs by Bates again as they jumped out to a 13-3 lead that proved to be too much to come back from.

Overall, we made too many errors as we hit only .103 for the game, and had only 39 kills to go with our 23 hitting errors.  Bates defense was all over the place, and they got every ball up it seemed, along with their OH's coming up with 16, and 17 kills respectively while ours hit .050 combined, and we were out-blocked...Isabel was our only player in double digit kills, but unfortunately had double digit errors also, and Alice and Sarah were the only ones to hit over .100, along with Mel, so it was a tough day for MCVB all together. 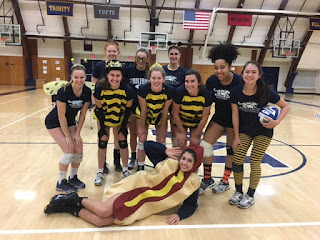 The good news for us is that we'll get an immediate shot at redemption on Friday night when we play them in the NESCAC Quarterfinals at Tufts!  We're excited about the opportunity to redeem ourselves, and are looking forward to putting it all together this weekend for a fun (and hopefully long) weekend of volleyball!!

On another note, Halloween started out our week, which was a fun way to get the week started.  Here's a picture of only some of our MCVBees...and a hot dog?!  :)
Posted by sjr at 9:30 AM No comments: