Spring Recruiting and Visits with Alums 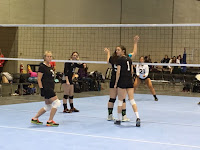 Spring really means recruiting season for me.  Along my travels to recruit and scout out potential new Panthers, I've also been fortunate to connect with some former alums, which has been really fun! 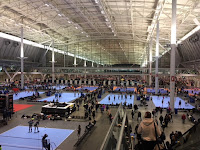 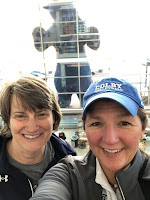 My first trip was to Boston, so a closer trip than most!  While there, I got to connect with Meg Anderson '14 who was also playing in the adult portion of the Mizuno Boston Festival.  It was great to see Meg back out on the court tearing it up!  She also was great to consult with me during her free time.  As a former assistant, she watched some recruits with me and weighed in with her evaluations, which I always appreciate. 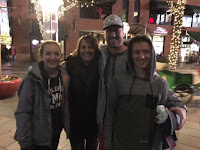 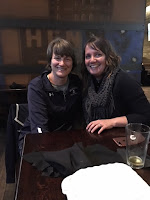 While in Denver for the Colorado Crossroads Qualifier, I got to have dinner with Dawn Trowbridge Marsh '00 and her husband Jon (also '00), and their wonderful kids.  Their daughter could become my first recruit whose mom also played for me...if I make it that long!  She's still got a few more years before she's in the recruit-able range, but I think she's playing some good ball these days!  I had so much fun at dinner just catching up.  The kids were fabulous to hang out and be part of the conversation too, which was so fun! 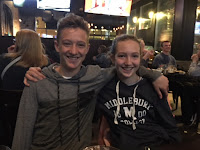 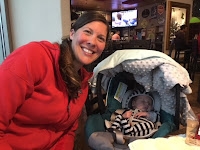 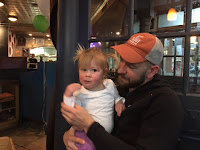 Also in Denver I took some time on Sunday after I'd finished recruiting to head up to Boulder to catch up with another alum from the same era as Dawn.  Amy Lowell Bloch '01 has a new baby and a toddler that I'd never met, so that was great fun seeing them!  I met Charlie when they were visiting New England before they were married...I think they stopped by during pre season a few years ago to say hello and check out MIDD.  It was great to connect with them and get caught up what's going on in Boulder and meet the kids.  Her new baby literally slept the whole time, peacefully!  Amazing...and Quinn is a sweet toddler in that great stage of hanging out laughing and smiling and playing with her food, but still eating most of it.  Adorable!!   I also got the full range of weather in CO with seasonable temps most of the time I was there, walking around in just a light jacket, to hail in Boulder, to giant wet flakes of snow that turned into a blinding blizzard on my way down from Boulder, back to simple light rain.  Anyway, really fun trip and great to re connect with both Dawn and Amy and their families! 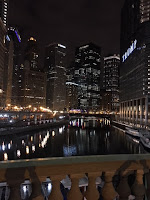 My final trip was to Chicago for the Windy City Qualifier.  I'd not been to this tournament before, but I love Chicago and was excited to go. A funny thing happened to me the day I was arriving.  I got a text from my niece from CA who said she was thinking of me because in the convention center next to her TESOL Conference was a huge volleyball tournament.  Long story short, we were at the same convention center!  She was finishing up her conference just as I was arriving, but we got to hang out and catch up briefly, which was a surprise bonus!! 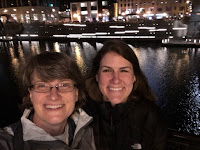 I had planned to see Jane Handel '12 sometime over the weekend.  Originally from Evanston, she still lives in the Chicago area, and has been doing some youth coaching and is still playing, so she was excited to join me for an afternoon of watching volleyball.  We probably watched almost three hours of volleyball while catching up before heading to Chinatown for dinner on Saturday night.  We then took the El downtown to the Riverwalk section.  It was a bit brisk to be out walking along the river, but there's a nice walking section down there and they've redone that  section along the river with lots of bars and restaurants along it, so I'm sure it's even better in nice weather. 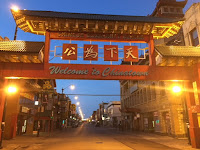 Following those trips we've had a nice string of recruits visiting campus, which has been great also!  If the weather would just cooperate, it might actually start to feel like Spring?!  Spring sometimes takes it's time coming to VT, but it's awfully nice when it does arrive!  Happy Spring!