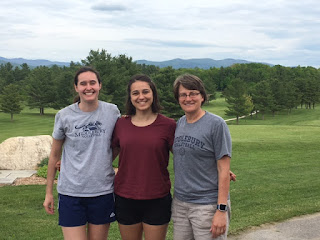 Senior week is that glorious time on campus between the end of finals and graduation.  It's a time when the college sponsors several activities for seniors to help them enjoy their final days at MIDD and continue to bond with their class.  It's also usually a time when I get to do some fun things with our seniors that we just don't always seem to find time for other years. 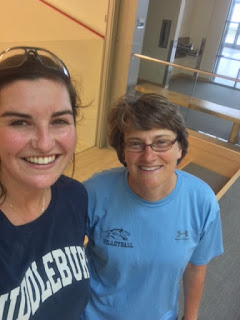 This year I was able to play 9 holes of golf with Melanie and Hannah, which was awesome!  It only took Mel a few holes to get back in the swing of things and then she started crushing the ball.  And, she did that with a set of PE clubs that were way to short for her, so nice job, Mel.  She talked about going into Law and how the golf course is a means of connecting and sometimes conducting business, so I'll guess that there's a lot more golf in her future, and she'll show up more than a few of her male counterparts, I think!

Hannah braved the course with us as her first golf outing other than Putt-Putt.  As you can imagine, she was a quick learn and once we figured out that she was attempting to swing the club with a volleyball platform, we made the adjustment and she started connecting with the ball much better!  You could tell she had experience at Putt-Putt because she had a nice putting touch, which is tough to do.  I'm not sure how much golf will be in her future, but if she chooses, she could have a lot of fun with it, I predict.


I was also able to play squash with Gabi, which was equally as fun!  We got a great workout and some good chatting in also, which was nice.  Neither of us are true squash guru's, but we had some great rallies and very close matches, and each of us won some, which was nice. 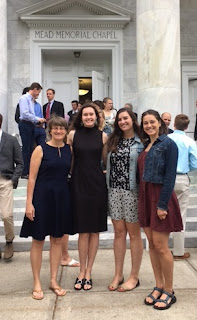 Today was also our Athletic Department Senior Awards Ceremony at Mead Chapel.  It was a nice ceremony to culminate the MIDD athletic experience with all the senior athletes (or at least some/most of them!)  They did a nice job including the history of the awards and the person for whom the awards are named, which was a nice addition to the ceremony, I thought.

Thank you all for sharing your time with me this week and over the past four years!  It's always nice to connect with you in endeavors outside of volleyball, and especially before you leave when it seems that "all of a sudden" four years have gone by--this is when I start to feel old, I think.  As always, I hope to see you all back at reunions or just back to see MCVB and MIDD.  I missed Char, so I'll definitely try to connect with everyone at graduation also.

I'll post some pictures from Graduation later this weekend also, but wanted to get these fun pictures in here, too.
Posted by sjr at 3:50 PM No comments: