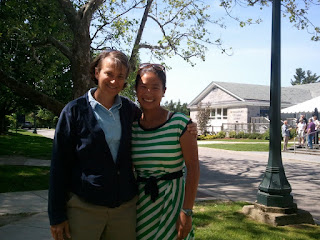 It's June, and at MIDD, that means Reunion Time! It's been about the soggiest Spring in VT on record, but Reunion Weekend was as nice as it could be. I had a fabulous time catching up with Jamie Wong '06! We sat outside of Proctor on the terrace in the sun and caught up on life. We did laugh about old times, and reminisce a bit, but we also had fun catching up on what's new for both of us.

She reported that she keeps in touch with Katy Hicks '05 in CA, who is currently in Med School, and also with several other MIDD VB alums. She met Reisa Bloch'10 (and they figured out they both wore the same jersey # while at MIDD!), and sees Lindsay Patterson '09.5, Lacee Patterson Phillips '07.5, and Evan Kanaly Herberts '03, but has yet to meet Blair Sly '01, so we'll have to work on that! Word has it that Lexie Fisher '08.5 is moving back to CA, so she will join the CA contingent of VB alums as well.

Jamie is as fit as can be, and has trained for varying races like half-marathons, triathlons, and even mentioned the words: Olympic Distance, and Iron Man in conversation!! Wow!! She's back in San Francisco working with her dad in the exporting business, but is also going back to grad school to get her MBA, and likely also her Realtor's License, just for fun. She's happy and healthy, and it was so great to see her smiling face back on campus!!

In other alumnae news, I just found out that Katie Kenney Enslin '03 had her first baby--a girl. Congratulations to her and her husband on starting their family, other than their "first" baby, Cash, the dog. We wish you the best, Katie and family!!
Posted by sjr at 11:44 AM No comments: