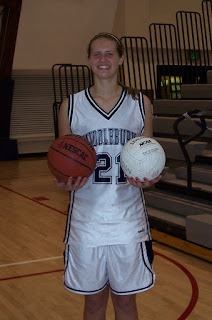 Freshmen Elissa Goeke has been a very busy student-athlete so far at Middlebury. She arrived on campus in late August for volleyball pre-season practices, and shortened her Thanksgiving and Christmas breaks for basketball. Now, 7 months into her freshmen year at MIDD, she's finally finding out what it's like not to have practice every day! Congratulations to Elissa on a very successful freshman year so far! Keep an eye on her name in both sports in the years to come! I interviewed Elissa recently, and here is what she had to say:

C: What was it like going from one varsity sport straight into another your freshmen year?
E: Volleyball season ended on a Friday, and I knew the basketball team had a scrimmage on Saturday afternoon. I went to watch them play, but I didn't start practicing until about a week later. The biggest challenge for me was socially, because I didn't know the basketball team as well as the volleyball team. This only lasted for a few weeks, as they were all very nice and welcoming. I'm so lucky to have two groups of friends that I will always know I can go to. On a different note, I remember it being really weird cheering for the first basketball game because I kept wanting to say "Let's go Midd. Side out!", but obviously that doesn't apply to basketball.

C: What are you favorite parts about each season?
E: My favorite part is game day. The best part about game day is the short moment of time after warm-ups before the game actually starts. Especially during a home game, this time just feels so special because I have so much anticipation for the game. I've lost all my nerves during warm-ups, and I cannot wait to play. In addition to home games, I enjoy the periods during the season when I can just focus on playing and bonding with my teammates. During volleyball season, this was during preseason, and during basketball, this was after Christmas break before school starts and during Feb. break.

C: Do you feel that your height at 6'2" was a bigger advantage in one sport over the other?
E: No, but I think I've learned to use my height better in volleyball. That is something that I am trying to improve in my basketball game. I definitely think both sports complement each other. Getting blocks, for example, is my favorite part of volleyball, and it definitely translates to blocking basketball shots as well.

C: What do you miss about both sports when you're not doing them?
E: I still get to play both basketball and volleyball, but sometimes I miss the competition of the games and matches. I miss road trips and spending the night in hotels with my teammates, and I miss most walking down to the gym everyday and seeing my teammates immediately when I walk into the locker room.

C: What did you find was most rewarding about being on two varsity teams, and what was the most challenging?!
E: The most rewarding aspect is obviously having two groups of amazing teammates. I have learned to much from my teammates and coaches. I know in addition to the experiences that I will have gained from playing sports, I will have all of the things I've learned from becoming close with such great girls. The most challenging part is probably balancing sports with schoolwork at certain times, but it is certainly manageable at Middlebury.

C: How has being involved with two varsity teams affected your social life?
E: I have been really lucky socially because I had an easy experience adjusting to college. Especially for volleyball since our season was in the fall, it was so nice to have an automatic group of friends before school even started. This continued as I got to know the basketball team which was great. I'm also lucky because I get along really well with my roommate. She is an athlete as well, so we have a lot in common. It's really fun to get to know people on the various athletic teams.

C: What is the biggest difference for you now, not to be on a team this spring?
E: The biggest difference now is that I have a lot more spare time, especially on the weekends which is weird. I like having more time to do work since this semester is harder for me, but I miss not playing every day and not seeing my teammates as much.

C: What are you most looking forward to this spring?
E: This spring I look forward to taking advantage of different activities that Middlebury has to offer. I've been able to be a fan at several home games which is a lot of fun. I also joined the newspaper staff, and I'm looking for other ways to get involved. Once the weather gets nice, I also want to go hiking and do other outdoor activities that I was never really able to do growing up in a more urban area.

C: Have you decided on a major, or a favorite academic department?
E: I came into college having no idea what I wanted to study. Middlebury was the perfect school for me because I've been able to take a lot of different types of classes. I'm thinking I might want to major in Environmental Studies, but who knows? I've already changed my mind about six times. I also have enjoyed my two Art History classes, which I wouldn't have anticipated. The one I'm taking this semester is called Ancient Games and Their Meanings, and it's so cool to take classes like this one that look at very specific topics with a lot of detail.

C: What would your advice be to other students considering playing two sports in college?
E: Do it! If you like both sports, there is no reason you should have to choose. I would just say pick a school like Middlebury where you can play two sports and still focus intensely on academics as well. I think the balance here is perfect, and I couldn't have asked for a better match.
Posted by sjr at 10:09 AM No comments: 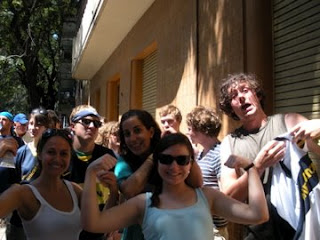 Natalie and Mallory were together for a while in Argentina before studying, and it sounds like they had a crazy, and very fun time exploring and visiting family etc! Buenos Aires, followed by Santa Fe to visit Nat's family, and then on to Cordoba. A lost wallet; dancing until dawn; visiting family that Nat hasn't seen for 5 years; a dog named Jack Sparrow; futbol games--and that is no joke down there!!; awesome food; and sticking out like total Americans while just walking down the street are just a few of their exploits. Here a couple of excerpts from Nat's email:

"There are so many huge neighborhoods and each one of them has its own estilo. but one thing in common: BEAUTIFUL people!...i wish you all could be here to see all of these things with me because everything is amazing! but even more amazing... is the night life and of course, fútbol!...the best thing ever [was] going to the boca juniors game! it was a whole day event too. we got there at 2 and waited for the game to start at 5 and then got back to the hostel around 10. waiting for the game was the best part! for hours we stood in the popular (general seating section), jumping and throwing our arms in the air chanting sounds. it mainly consisted of spanish curse words and DALE BOCA, DALE BOCA! i couldn't really understand any of the cheers, but the environment was so contagious that it didn't stop any of us from clapping, shouting, and whistling at the other team. once the game began, the crowd instantly hushed to watch the game.....

so, after buenos aires, we took a bus to santa fe where my mom's family is from. we had the greatest food ever! an asado from my tío ricardo in which i'm pretty sure we just devoured a whole cow, alfajores (cookies with dulce de leche essentially), awesome italian food from my abuela, and the argentine staple, yerba mate with orange juice (té de rey is the name of it) to name a few. we stayed in my tía pipis house and i had a painful love with their dog, jack sparrow 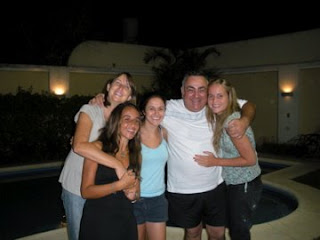 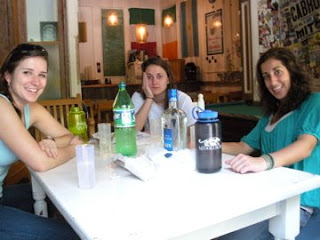