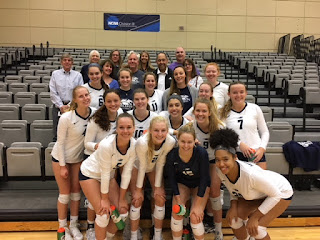 Last weekend we traveled to Ramapo, NJ to play both NYU and Ramapo.  Against NYU we battled three close sets.  After trading points in the first set, we rattled off an 11-1 run and closed out the set trading points again.  The second set saw us get behind early, only to come back within one before another long stretch of losing points.  Down 12-20, we staged a very steady comeback to tie it up at 23-23 before pulling out that set win by a score of 30-28!  The third set was another very tight contest until we put together a spurt tied at 19-19 that would get us to 23-19, but NYU wasn't finished yet. They scored 3 in a row to get within one at 23-22, but both Isabel and Corley had kills to finish off the sweep. 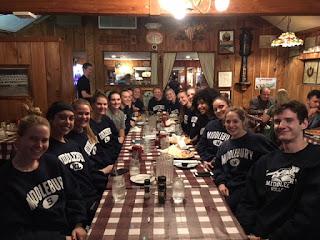 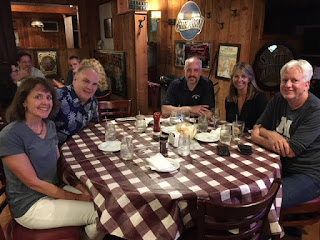 Although we had to get out of some class a little early to leave, our early play schedule allowed us to actually go out to dinner Friday night, which is somewhat of a luxury for us, so we all enjoyed that! 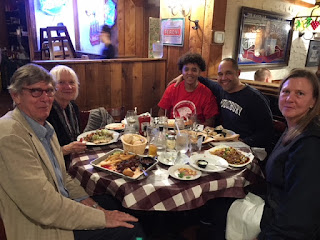 The second day we played a Ramapo team that was not quite as competitive as NYU had been, and we came away with a sweep there also.  Everyone played in this match, which is always fun!  The level of play just kept steady if not better as we used the bench, which was really fabulous to see. We hit over .400 for the game, and had 12 service aces for a strong overall performance.

Last night we were back at home for our only mid-week home match vs. our only in-State opponent, St. Michael's College.  We took charge pretty much right away, after giving up early points in each set, we ended up putting together quite a run of points and got another sweep in just about an hour, which was perfect for a mid-week match.  Everyone played again, and again the level of play kept steady or increasing as we used our many talents nicely!

We're on the road again this weekend headed to Maine for another NESCAC weekend.  We'll be at Bates on Friday night, and then we join the rest of our MIDD Teams at Colby on Saturday.  It's not often that we're away at the same place as the rest of our teams, so we're all excited to play some NESCAC rivals, and also be able to cheer for some of our teams Saturday morning before we play Saturday afternoon.  LETS GO MIDD!!
Posted by sjr at 9:54 AM 1 comment:

There have been some fun alumnae things going on this month so far!  We've had visitors to Middlebury, and visitors at away games, which is always fun.  And, there was a wedding featuring a former MCVB "stud" where many old teammates gathered for lots of fun, laughs and good times!

First of all, Meg Anderson '14 came to see us opening weekend at Wheaton, which was fun!  I actually didn't get a picture, but promised we'd get one next time!  Also at that tournament, we had Katie Kenney Enslin's '03 parents (who are some of our biggest fans!) visit us and cheer us on, and it's ALWAYS great to see them! 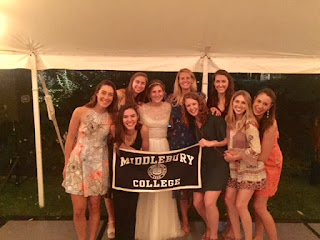 Then, there was a gathering of many MCVB alums for Sarah Studwell's wedding!  There were many fun times and pictures that came out of that weekend, but here's the group photo of them all, which could appear in the Middlebury Magazine with the official banner?!  :) 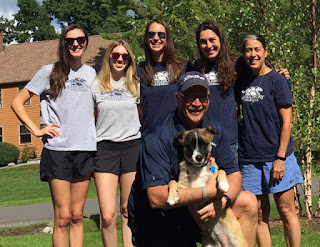 They also took an informal picture featuring Meg, Katie, Kathryn, Lizzy and Lizzy's parents and dog--ALL in Middlebury Volleyball swag--looking good, MCVB!!  A big congratulations to Sarah Studwell on her wedding!  It sounded like a really fun gathering of old friends and new ones to celebrate life and love!

Lizzy posted pictures from the weekend with a quote that made my day:  "Thank you MCVB for fostering my love of nachos and teaching me that it was never really about the volleyball after all."

It's always fun to hear from any of you alums out there, and of course, always fun to see you back at MIDD, or if we're in your area, come out and see us there!  Happy Fall!
Posted by sjr at 3:43 PM No comments:

Our first Conference weekend was home this year, which was very nice.  We opened once again with a marathon match with Amherst, much as we did last year, but this time we came up on the short end of the 5 set duel.

After not playing with our freshmen our opening weekend, we had a mid-week match at Plymouth State where many of the Rookies got to test the college waters, so to speak.  That match was a success all around, and we could start to see a lineup unfolding for the first NESCAC weekend.

The Amherst match was a great test, and a tough one to start out with, but all in all, it was a good thermometer for us.  In almost every positive category we had a slight edge (more kills/assists, aces, digs, and tied for total blocks)...but in almost every negative category, we also held the edge (attack errors, serving errors, blocking errors, and ball handling errors.)  Our receive was very good at times, but we still need to keep working on being aggressive and smart with our out of system balls.  It's always tough to lose a 5 set match, but I felt like we fought the whole time, and were right in it the whole way.

Isabel and Sarah continue to lead our offensive efforts, and first year's Corley and Maggie jumped on the scene by putting up some big numbers early--Corley led all attackers for both teams with 17 kills in her NESCAC debut, which was exciting, and Maggie wasn't far behind with 13.  Gigi is anchoring our defense once again, and aided by our very own Claire, who we're thrilled came back to us after being abroad last Fall! 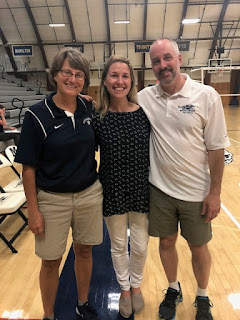 We also had an alum from '06 back to visit with her husband to show him a VT Fall weekend and they were excited to catch our game!  It was fabulous to see Georgia again, and we had fun reminiscing and we realized that she was here when my now 13 year old son was born!  Yikes!  Always fun to reconnect with MCVB alums, and she was excited to see the team play!!

Saturday's match featured an improved Trinity squad who came out strong and took a very close, extra point first set 28-26.  After that we seemed to find our stride, and our defense started to gobble up some balls that had dropped in the first set and our attackers found the gaps in their defense and we overpowered them for the win.

All in all, it was a very good opening weekend, and we're all pretty excited about the group we have this year and what we can accomplish together!  We've had all week to work hard and prepare for our upcoming tri-match at Ramapo where we'll play the host Ramapo on Saturday morning after playing NYU on Friday night.  We're excited about the road trip and another chance for us to grow as a team and test our abilities and teamwork! 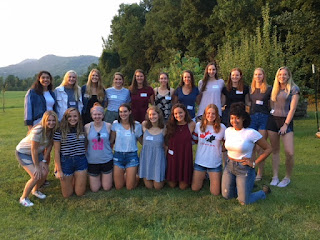 I'm a little late in posting this, but we had a full and competitive pre season and we're excited to be heading into our first Conference Weekend tomorrow!  We had a large group in pre season, and some hot weather, but at least the backboards didn't fog this year, so we had that going for us.  We had our first gathering at my house, as usual, with the whole group including any parents that were around, which is always fun!  Then, during pre season in addition to practices, we had some time to do some team building exercises and lots of paperwork and trainings. 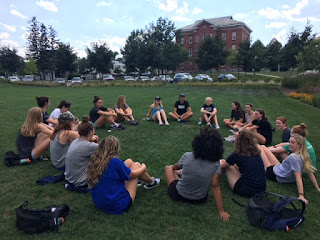 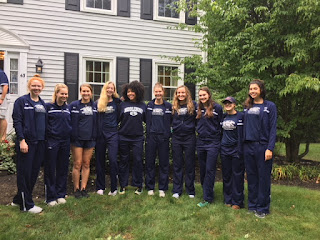 Senior Isabel Sessions was also job interviewing in NYC on Friday morning and managed to leave after practice on Thursday, fly to NYC, interview Friday morning, rock the interview, and still make it back to Boston and then Wheaton College before warm-ups!  Whew!  That was a full Friday for Isabel, but we're glad she made it back, and also glad she rocked the interview!  We came away from the weekend 2-1 overall.  Despite the last loss to the hosts Wheaton, I think we all felt pretty good about where we were and what we were doing for this early in the season.


There were a few highlights about the weekend not exactly related to playing volleyball.  Our parent support was fabulous as one parent hosted our sit-down dinner (which we don't get to do all that often) on Friday night at a local restaurant, and then Beth's parents hosted the team for breakfast on Saturday morning at their home in Franklin! The breakfast options were amazing, and home cooked, so I hope the team doesn't think that our future team meals will be this good?!

Our team was relatively small without our 5 freshmen, but we had some parents in for the weekend, so it made for a nice sized group.  We always like fan support, so thank you all for coming out to see us!  It's fun for Beth to see the big bus parked in front of their house, also, so we took a family picture of that for fun.  A big "Thank you" to the Neal's for hosting us all at their house and for the fabulous breakfast!! 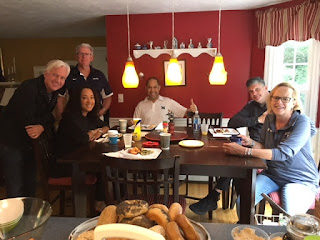 Another highlight was that my daughter goes to Wheaton, so I got to see her after her first two weeks of school, so that was great.  Our fan base was spread far and wide, both in distance traveled, and in years of involvement with the Program. 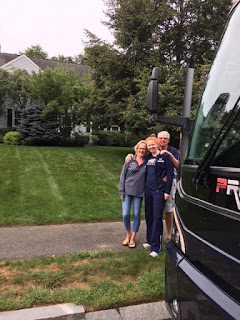 Sarah's and Gigi's dad's came from CA, Chellsa's parents where there from NY, Beth's parents were there, and Claire had friends visiting.  Our volunteer Assistant Coach, Jill came down with her husband and son who was college touring and got a look around Wheaton and a couple other colleges in the area while they were there. 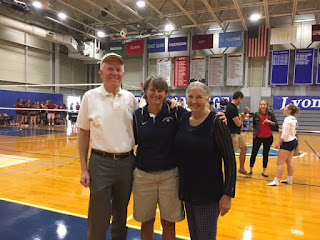 Additionally, Meg Anderson ('14) was on hand to watch us, as were Katie Kenney Enslin's  ('03) parents.  They're long-time fans of ours and it's always special when they come out to see us play!  Thank you all for your support, and we look forward to seeing you all again during our travels this season!