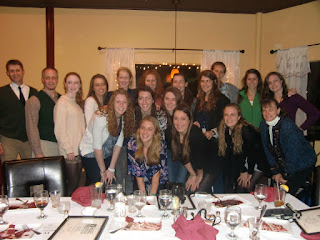 What a special way to end our season. Sweet Maries, a new restaurant in town, agreed to open on a Sunday, just for us. There was a cute sign put on the door that said "Closed for Private Party: MIDD Women's Volleyball Team." It was a nice time for us to come together again, and for the players to get a brief reprieve from work. Rachel couldn't make it because she was doing some professional development in Boston, but Steve and Brian and I were there as well as Max, our manager extraordinaire. I'd also like to say a very special THANK YOU to Piper's parents, who were so generous as to provide this special dinner for us from afar.

After a delicious dinner, we celebrated our season once again by handing out our many awards and honors won during the season. The freshmen actually receive an "old fashioned" M that can be sewn onto a blanket, sweater, jacket etc, although I'm not sure anyone actually does anything with them any more?! In addition, everyone receives a certificate from Middlebury College. Then, we had several All-NESCAC certificates to hand out, which is always nice!

The Team Awards voted on this year were Contribution On Court, Contribution Off Court, MCVB Spirit, and then Brian and I gave a Coaches' Award. Those recipients were:

It was a really fun evening, and it's always sad to say good-bye to our seniors, but what a lasting mark they've made on MCVB. As I told the group, I think that Jane and Elissa actually coined the phrase, "MCVB" which could last forever now?! Also, those two were instrumental in the evolution of the Program into what it has become now.

Midd VB has seen a few waves of success over our history, but this most recent wave was started with the combination of Lauren Barrett along with Jane and Elissa. Having Lauren's leadership as our setter for four years was key. In her second year, Jane and Elissa arrived as freshmen, and we followed that up with Julia, Caitlin, Maddie and Stud. Then came our sophomores, and now our freshmen class. It's an evolutionary process, but maintaining the consistency of the high caliber of player we have now throughout the team will be the key factor. It's the depth of talent as much as anything that leads to sustained success.

Jane and Elissa have been here through it all and feel ownership of the Program and where we've come from, and where we're headed. As the coach, that's exactly what I want: for players to feel the ownership of the Program. Hopefully means that they'll stay in touch with us, and keep tabs on us, and really cement the longevity of the impact of being a part of something much bigger than oneself! I see this commitment with alums writing back saying how proud they are to have been a part of MIDD Volleyball, and that's been really great to hear on so many levels. And, it's fun to have them stay in touch.

That's what I love to see happen, and it's the consistency that we're going for--that lasting tradition for MCVB. Hopefully this Blog will help all our alums keep track of us, and share in our common enjoyment of the fun of playing volleyball at Middlebury. It may also attract new recruits who see/read how much FUN we have together! :)

With that, I hope you all had a wonderful Holiday, and are getting the New Year started off on a good note! Our next posts could be updates from our Juniors who are going abroad, or some alumni news....stay tuned.
Posted by sjr at 9:32 AM No comments: