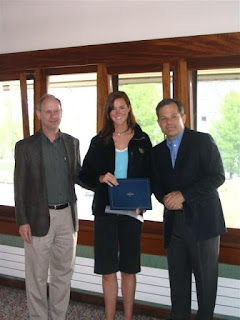 Whitney was in the news recently!! She was honored with the First Year Achievement Prize. The First-Year Achievement Prize is awarded annually to a well-rounded first-year student who demonstrates academic excellence and relates well to others. The award is given in the sophomore year, based on the first-year experience. Whitney received a certificate in an awards ceremony in Mitchell Green Lounge last week. The award was presented by Gus Jordan, Associate Dean of the College. (Tim Spears was also there to recognize the award winners, and thus in the picture also.) Congratulations Whit! You're a very deserving candidate!
Posted by sjr at 1:51 PM 1 comment: