This year is the first time we've been the "lone" school in the NESCAC.  One weekend each season, we all play our travel partners, which meant we had a free weekend this year since we don't have a travel partner.  We decided to play in the Roadrunner Classic, hosted by Rampapo College, where we played three non-Conference opponents.  First up on Friday night was Farmingdale State, followed by both NYU and Ramapo on Saturday. 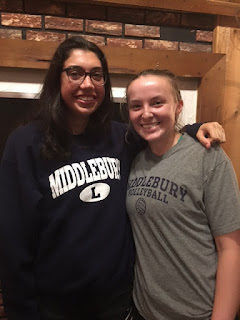 It was a hot weekend, but fortunately there was AC in the gym at Ramapo.  Friday night we got off to a great start against Farmingdale, dominating the first set 25-11, hitting .385.  The second set we still cruised to a 25-18 win despite hitting under .200.  We may have let our focus slip away in the third set, and then to Farmingdale's credit, they responded with some renewed energy of their own, and won the 3rd set 25-23.  After regrouping, we managed to end the match 25-20, again raising our hitting % back up to .258 for the win. 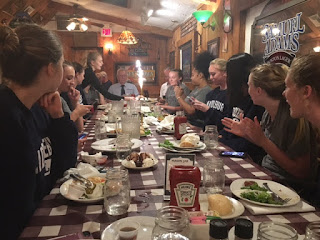 We often play late on Friday nights, mostly to reduce missed class time, but this time we played at 5pm, which allowed us to actually go out and eat at a restaurant afterward, which was great.  Saturday was Sarah's birthday, and Sunday was Emma's birthday, so we celebrated with some flaming deserts offered by a parent, which was a very nice treat.  We had a wonderful showing of parents and family there this weekend with two alums (and siblings) in the house with Lauren and Olivia both there, and then at least one parent from half the team, which was really fun!  Sarah's dad was there as it was her 21st birthday, and Emma's mom made it for her birthday weekend also, along with parent(s) of Alice, Emily, Beth, Chellsa, and Gigi.   Emily's trainer was also there again to see her play, along with his adorable daughter who gave Emily the biggest hug before the match!!  Thank you for all of the support, parents and friends! 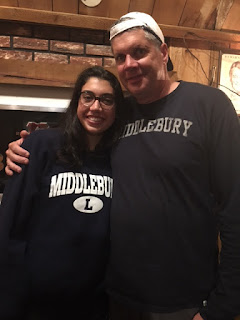 There was also some dancing going on in the gym on Saturday morning, and I even caught some on film, but I won't post that here--whatever they're practicing for, it's looking good, guys!  :)

HOME opener is this Wednesday at 7pm when we host Colby-Sawyer College, followed by our first HOME Conference weekend on Friday and Saturday when we host Bates at 7pm Friday, and Colby at 2pm Saturday!!  LETS GO MCVB!!! 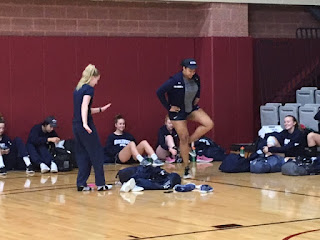 After a long, tough weekend without our full team, we were ready to start classes and have a week to prepare for our first Conference weekend.  Our schedule started off with Amherst on Friday night, followed by Trinity Saturday afternoon.  Pre season turned out to be perfect weather-wise with cooler temperatures and sunny days, but these past few days summer was back with hot, humid days.

Friday night we arrived at Amherst for our opening NESCAC match up, which was a hot evening, despite the open doors and evening hours.  It was a doozy, for sure.  We both battled the night away, into a 5th set finale which we pulled out in style, I think.  We lost the first set by 3 points, only to win the 2nd by 3 points.  The third set saw us get out to a bigger lead than either of the first two sets when we went up by as many as 5 or 6 points.  However, they battled back in the late 20's to take a lead and not give it up for the comeback (and go ahead) win in set 3.  Down 2 sets to 1, we battled back and forth in the 4th set, and then opened up a little lead and hung on to take that set 25-22 and forced a 5th set.

The fifth set was another back and forth battle.  We went ahead late and took a 12-9 lead, but they tied it up at 13-13, and went ahead 14-13 for their first and only match point.  Eliana tooled their block, and then Isabel rolled a nice off-speed shot down into the court, and then they had a hitting error to give us the final point of the match. 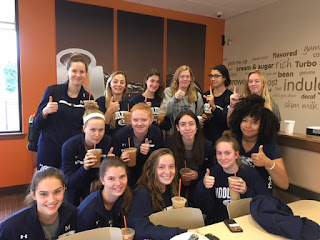 It was a crazy way to start the NESCAC, but probably appropriate also.  We expect the NESCAC to be very deep and competitive this year, as always, so we were really happy with the team's resilience and mental toughness to pull out a tight match like that, along with giving up leads and coming from behind.  All good stuff.

We spent the night in Springfield, MA (which had a Dunkin Donuts attached to our parking lot!) before heading to Trinity on Saturday.   We faced another tough Conference foe and battled back and forth before taking the first set 25-23.  In the second set Trinity came out strong and dug everything we seemed to be hitting at them, and blocked us pretty well, and won that set somewhat handily 25-19.  We battled right back in the next two sets to win convincingly with 25-19 and 25-18 scores to close out the match.

We're very happy with the play of everyone involved, and since this was our Rookie's first weekend of action, almost all of them found their way into the game and did a great job.  Jaime was starting at middle hitter, Rebecca came in to serve and play defense for Sarah, and Shea spelled Isabel for a bit, so it's really great to see the team coming together like this so early in the season.  We're excited about where we're going, and we have a week now with only non-Conference opponents before starting our Home Stretch at the end of the month.  We have a lot to work on and fine tune, of course, but it's great to see our resiliency and composure in tact this early!
Posted by sjr at 1:04 PM No comments: 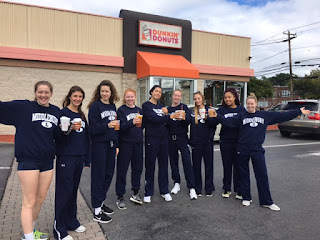 Opening weekend of the 2017 Season started with a very long, but successful day!  Our first match was scheduled for 4pm, and our second one for 8pm, so we had time to get food in between, which was nice.  This was our longest weekend by far of the season with four matches and only 9 people since our freshmen were all on their respective Orientation Trips.  The first match of the day (not ours) was a 5 setter, so the whole schedule the rest of the day was behind.  We beat SUNY Oneonta 3-0, but still didn't get to start our Union match until almost 9:30 pm Friday night.  After winning the first two sets, we dropped the next two and ended up winning in the 5th set at almost 11:30 pm.  We like to get Dunkin Donuts coffee in the morning, but we may have needed it the next morning more than some mornings.  We did get to sleep in, though, so all in all, it wasn't all that bad since we didn't play until the 1pm match Saturday.

Here's the basic recap of the weekend:

SUNY Oneonta--we pretty much dominated the match, which was great for us in our season opener.  They had just come off a long match right before, but it was our first match of the season, so you never know.  We hit .400 for the game as a team, and Sarah had 10 kills on 11 swings for a .909 hitting %, which is ridiculous in college volleyball and they're not even that bad of a team (well done, Sarah!!); AND Chellsa attacked for 5 kills on 7 swings, which as a setter means she picked her spots very well indeed!  Becca hit .500 with a match high 14 kills on 22 swings.  Gig and Beth led the team in digs with 11 and 8 respectively, and thus it was a very good start to our season.

Union--what a match!  We won the first two sets, and although they were competitive, I was really hoping for our players that we were going to be able to close it out in three sets...not to be.  We narrowly lost the 3rd set 23-25 before dropping the 4th also 20-25.  However, we jumped out in the 5th to lead 4-1 and never looked back as we stayed at least 3 points ahead the rest of the way and closed it out 15-10 on a service ace by Becca, a kill by Isabel, and a couple of errors by them.  it was late, but a win makes it worth the late night in the gym! 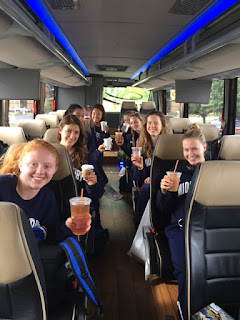 The next day we slept in, ate breakfast and had our Dunks on our way back to the gym for our 2nd full day of volleyball with two more matches.  Most weekends will be 2 matches with a couple being 3 matches, but we won't play 4 matches in one weekend the rest of the season.  Here's day two's highlights:

Stevens Institute--Very competitive match, and we were the only team there that weekend that took a set from them.  They're very good, don't get me wrong, but we were right there with them the whole time.  We battled the first set to an extra points victory 26-24 before dropping our least contested set 15-25 in set two.  The third set was again a back and forth battle to extra points, this time tipping for the Ducks, unfortunately 24-26.  In the fourth set we would trade points, and then go behind by 3-4 points, and then come back to either tie it, or get to within one point, and then go behind again by a few points.  We were tied 8-8, close at 14-15, and then went down 16-20.  After that we fought back to a 21-22 score before dropping the final three points for the 21-25 loss.

By the final match against Brockport, I'm afraid we may have run out of steam a bit.  The team hung in there, and dropped the first set 20-25, but battled back to take a 23-21 lead in the second set before dropping the final 4 points to lose the set 23-25.  We controlled a competitive 3rd set 23-25, but led the entire way after getting out to a 3-0 lead, and never letting it go this time.  However, in the fourth set, we fell behind by quite a bit and fought back, but just couldn't quite muster the strength to push a 5th set.

Overall, I was very happy with our fight, our composure, and our play in general.  It was an exhausting weekend of volleyball with everyone on the bench playing in every match.  They all hung in there and kept a great attitude the whole time, which is a good foundation upon which to build.  Becca was awarded All-Tournament Team for the weekend, but everyone really contributed and everyone had moments of shining excellence over the weekend, which was really great to see.

We're excited about this year, and having our full team means that we have options in almost every position, which is great.  We have the week of practice to recover a bit, move forward with our conditioning and keep moving ahead with our skills, which is all exciting and fun!  This coming weekend will be our opening NESCAC weekend.  Let's GO MIDD!!