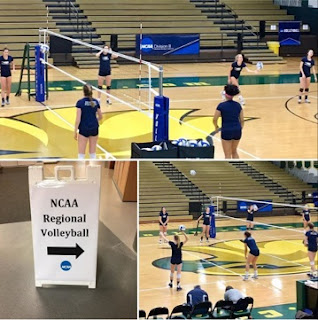 What a match!  We were the only match the whole weekend that went to 5 sets, and I'm sure it was an exciting match to watch.  We were sent to the NY Regional at SUNY Brockport and were matched up in the first round against Ithaca College.  Personally, it was a good match up as the coach and I are friends and have been for years now but we don't play them in the regular season, so it was nice to see him again.  After watching film, I thought we matched up well with them player for player, and we were all excited about the opportunity to play in the NCAA's--first time for this group since we hadn't been since 2012.

Because of the distance, we practiced at home on Thursday night and then loaded the bus with Flatbread pizza's and headed for Brockport, NY.  We arrived shortly before midnight and slept soundly before heading over the the gym for our morning practice time.  The gym was very nice, but had a somewhat low ceiling so it was nice to get the feel for the gym, but that's a luxury that we normally don't have.  The match before us went in three straight, so we were right on schedule for warmups before the game, which is nice.

Ithaca proved to be a very good team, and like we thought, we matched up very well.  The first two sets were decided by only two points, both extending beyond the 25 limit, but unfortunately we came out on the short end both times.  The match seemed to be going in small runs back and forth by both teams.  It was very tightly contested, yet both teams would get leads and them come back.  We had an early lead in the first set, only to see it dwindle to a 20-20 tie, and eventually a 25-25 tie before they scored the final two points to take the first set.  The second set was the reverse with Ithaca holding early leads, and even a 16-11 lead before we fought back to tie it up 21-21 and 24-24 before they again scored the final two points for a 2-0 set lead in the match.

At that point, we switched to our 6-2 offense to try to contain their OH's a bit more with a bigger block, and that seemed to work well.  That third set started off with us trading points until we opened up a lead 20-12, but Ithaca fought back to within 3 at 23-20, but we secured the 3rd set with a 25-21 victory.  The forth set was more of the same tight, back and forth play until we again pulled away late behind some strong serving from Chellsa and pulled the match even at 2-2, forcing a deciding 5th set!

The 5th set was again more of the same, but we seemed to have the upper hand a bit, taking a 7-4 early lead, and even getting three match points, up 14-11.  I've watched this ending several times now, and we had good opportunities, but each time Ithaca came through with the counter.  We initially had a very good tip opportunity by Alice that had been working all night, and their blockers just caught it, sending it back to our side instead of it trickling down behind them.  Melanie had a great hit that they barely got up and were scrambling to keep in play, giving us a free ball, which we executed well, but they blocked us on that attempt also, and their final point came when we gave them an easier ball that they sent to their OH who put away the match winner.  Both OH's for them had 20 kills, and we were expecting one of them to be tough to contain, but not both.

Our offense was fairly balanced as it had been all season with 18 and 13 kills by Becca and Isabel, followed closely with 9 and 8 kills by Sarah and Alice.  Eliana came in for the last 3 sets and tallied 5 kills and 3 blocks, while Melanie finished her career with 7 blocks and 3 kills.  Sarah and Alice both added 3 and 4 blocks respectively, and  Chellsa led the team with 5 service aces.  Gigi led our defensive effort in the back with 17 digs followed by Emily with 11, but their libero came up with a match high 35 digs as they tallied 85 digs to our 61.  We actually ended the match with a higher hitting % (.207), more aces, and more blocks, but we just didn't come up with the points when we needed them.

I am so proud of this team!  We have been on the other (winning) end of so many matches like this during the season, and we just kept fighting each and every time.  We kept our composure, and made some big plays, and this time, it just didn't go our way.  I give credit to Ithaca as they came up with the plays they needed to win, but it was a great match all the way around.

We'll wrap up our season soon with our banquet and final meetings, and then most of our juniors will go abroad, we'll see our seniors finish up their college days, and then we'll welcome the new freshmen and do it all again next year!  I love my job!!  :)  Happy Holidays to everyone!!
Posted by sjr at 9:47 AM 1 comment: