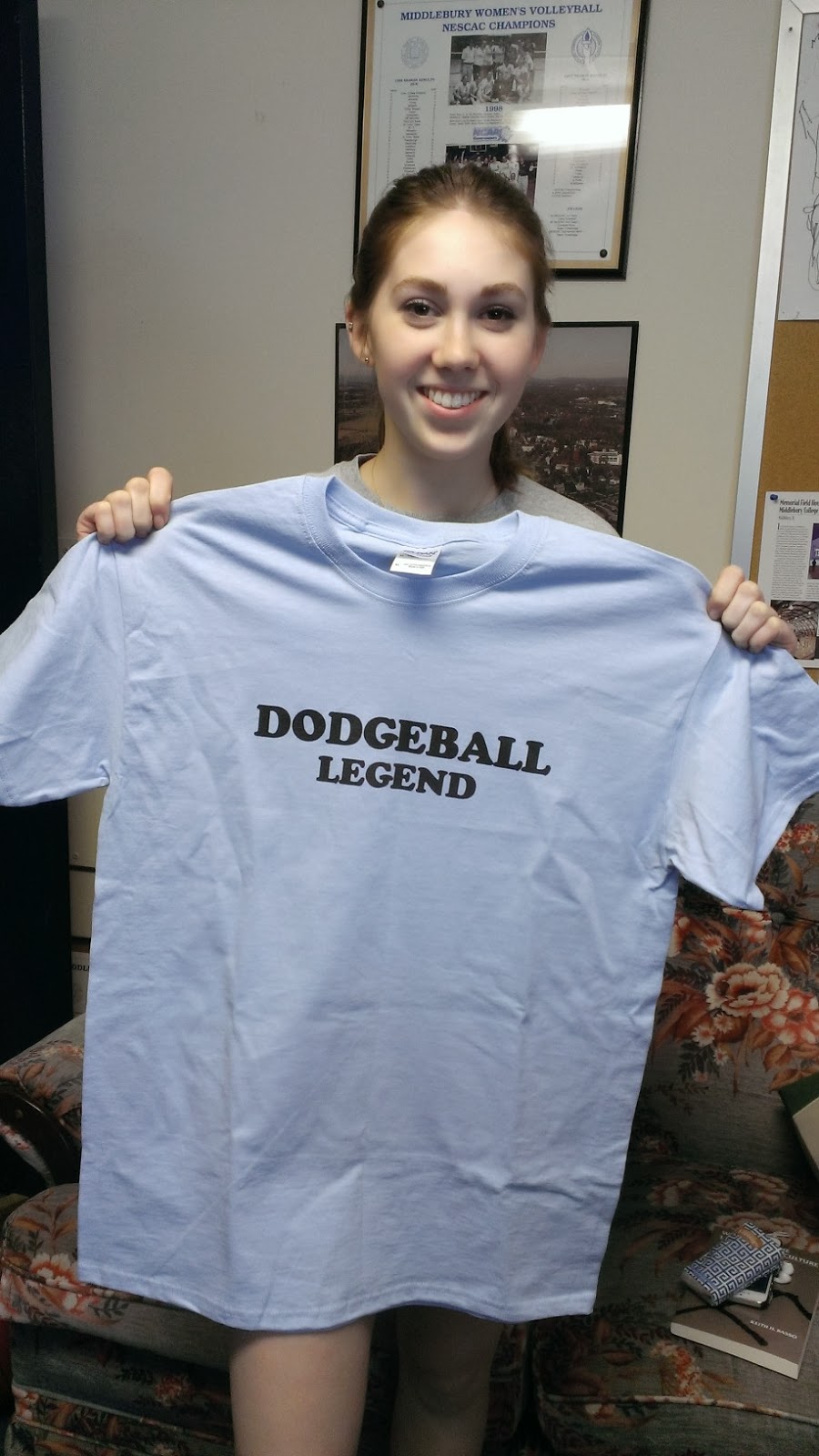 Katie participated in a J-term PE course called Dodge Ball.  And, she's now the undisputed LEGEND of the class, and has the tee shirt to prove it!  The teams were split several times each class, and the winners got awarded points.  At the end of the class, the person with the most points, thus the most team wins, was awarded the Dodge Ball Legend tee shirt.  This is a coveted tee shirt, or at least, the opportunity to get your own entry in the Team Blog was coveted by Kei$sha, who was also in the class.

Katie and Kathryn had said how much fun the class was, and invited me to join them, but I kept putting it off.  After confirming with Pete (the instructor) that they often had "guests" in class, I joined in on the last class myself to experience the fun firsthand.  And, FUN it was.  I hadn't played Dodge Ball since middle school, I don't think.  I hadn't laughed and had that much fun in ages!  Thanks for prodding me, guys, and congrats to Katie, the new "Dodge Ball Legend!"
Posted by sjr at 12:35 PM No comments: 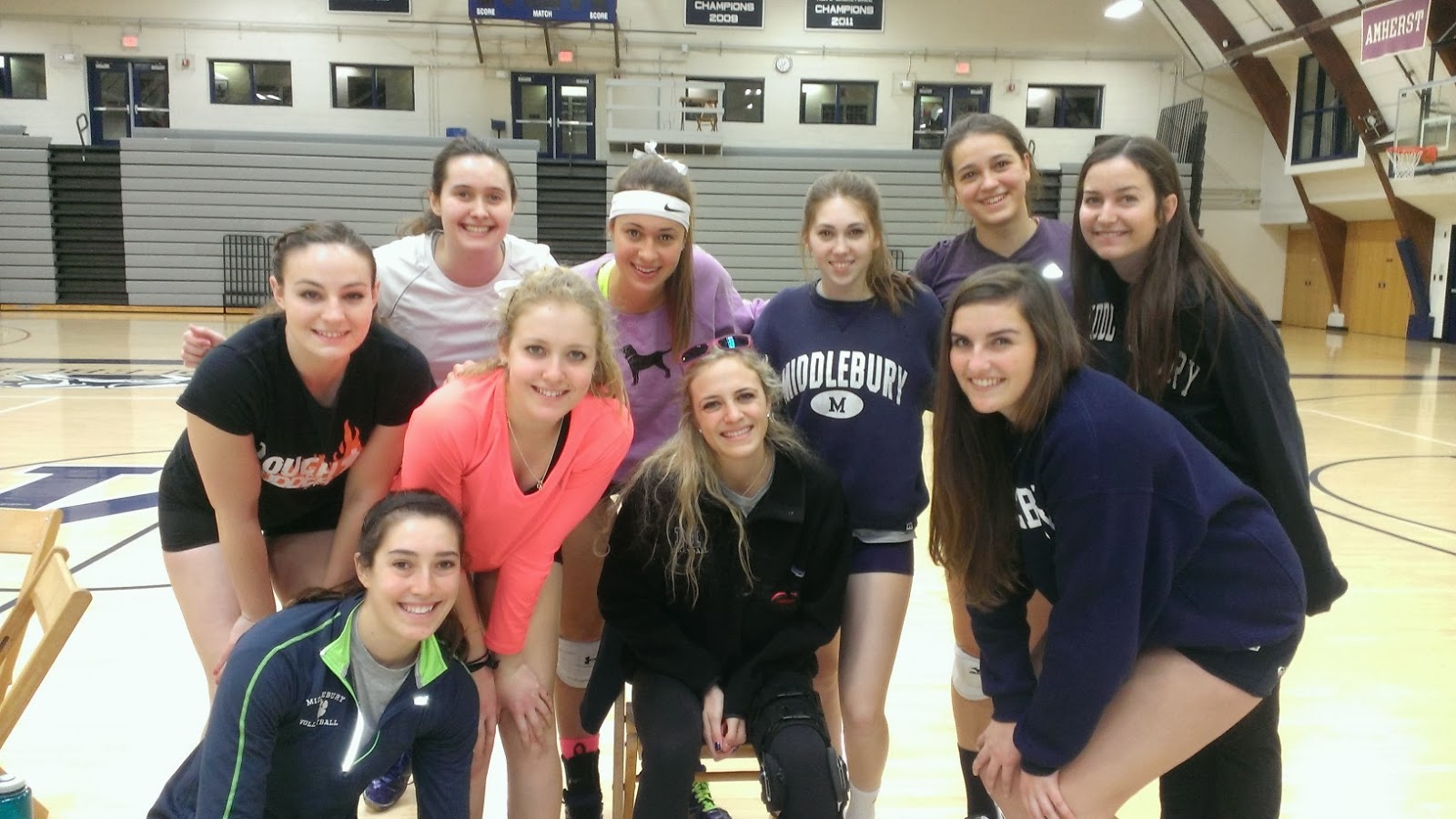 This J-term, our team hosted a co-ed, 4v4 tournament. The idea was for it to be a lot of fun, but also provide somewhat serious competition, and we decided to do it as a fundraiser, with all entry money going toward an organization of our choice. The team got together, and came up with an MS Organization to honor a NESCAC rival now living with the disease.

We have many different rivalries, but there's been one particular rival that's fueled our fires, so to speak, over the past several years.  This year, that rivalry started out like any other, but at the end of the season, we discovered something about a key leader for this opponent that really hit home for our team.  Suddenly, this competitor became much more than simply a rival, but a comrade in the arms of life.  What we share is so similar, it's just our uniforms that differ.

To Sophia, we are all supporting you from afar!  We'll continue to strive to beat your alma mater, as they will undoubtedly be striving to beat us along with the rest of NESCAC.  Meanwhile, you will be striving to beat this new rival of yours.  MS doesn't know what kind of fierce competitor it's up against in you!  Go get 'em!! 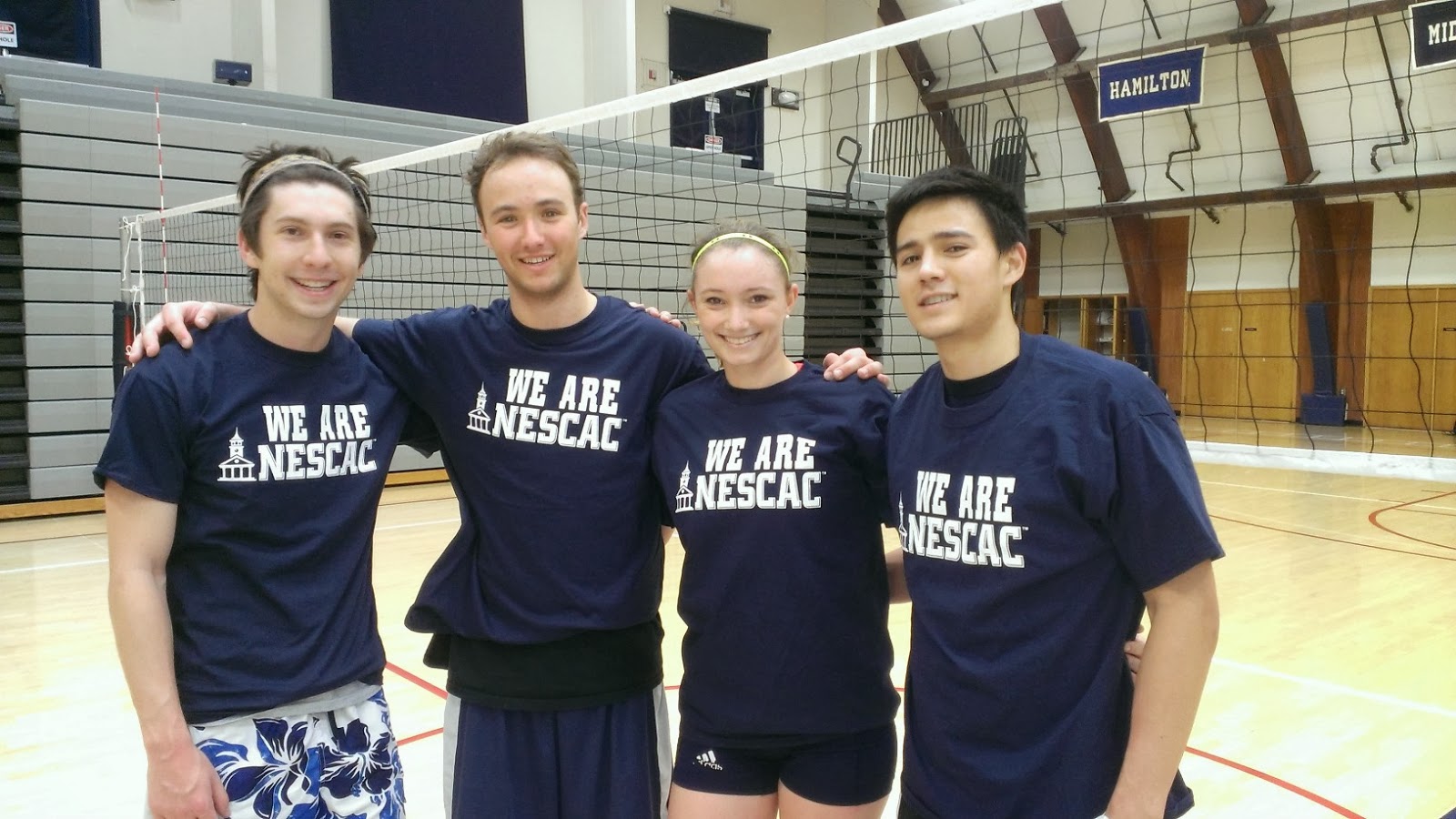 As for our tournament, we had 11 teams enter, so we raised over $200 for a to-be named MS Organization and the money will be donated on behalf of Sophia.  There was a lot of fun had by all during this day of volleyball, back in January.  In the end, the championship came down to Allie's Angels, and Had 4 Humanity.  Well fought, right to the end, but Allie's Angels pulled it out for the victory...and the free tee shirts!!  Congrats to all that participated in this worthy fundraiser.   We're hoping it can become an annual J-term competition! 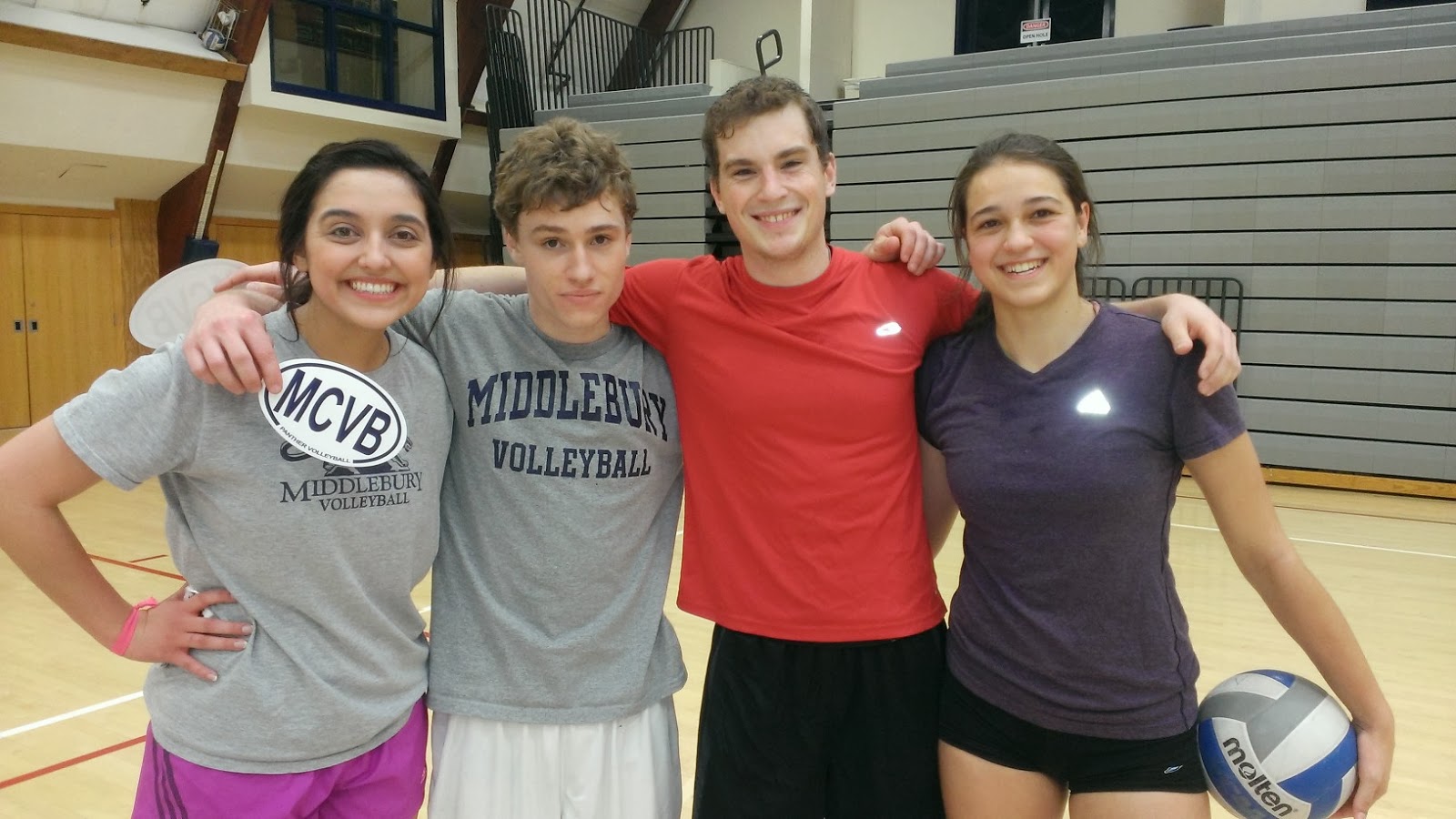 Winners in the top picture with their "cool" 1st place tee shirts!!  Hannah's team to the right, in second place.   Everyone on the team chipped in in one way or another, either playing, being the up ref, keeping score, supporting, or even commentating for the finals.  Let's face it, the next best thing to being in the finals, is getting control of the microphone to commentate during the finals! Everyone was there to help out, and Amy was the one senior to participate--and her team made it to the semi-finals! (I think?!)

Next year we may have other fun awards, for things like most spirit, best outfits, best team name, or things like that, but we had a lot of team spirit by all groups, and some great team names, too.  In addition to our top two teams, Christophe had a skier group  ("Snowboard Club") which had my vote for best team outfits; Olivia got some crew members to form a team called "Boat Haus"; and of course, Kathryn's team was called, "Ke$ha's Army!"  In addition, we had "Peary and Co," "Team CALAMITY," "Sets on the Beach," "The Black Panthers," "Ladiez and the Tramp", and finally, "Jogreglottouf;" I think!? These are just some shots of the FUN day! 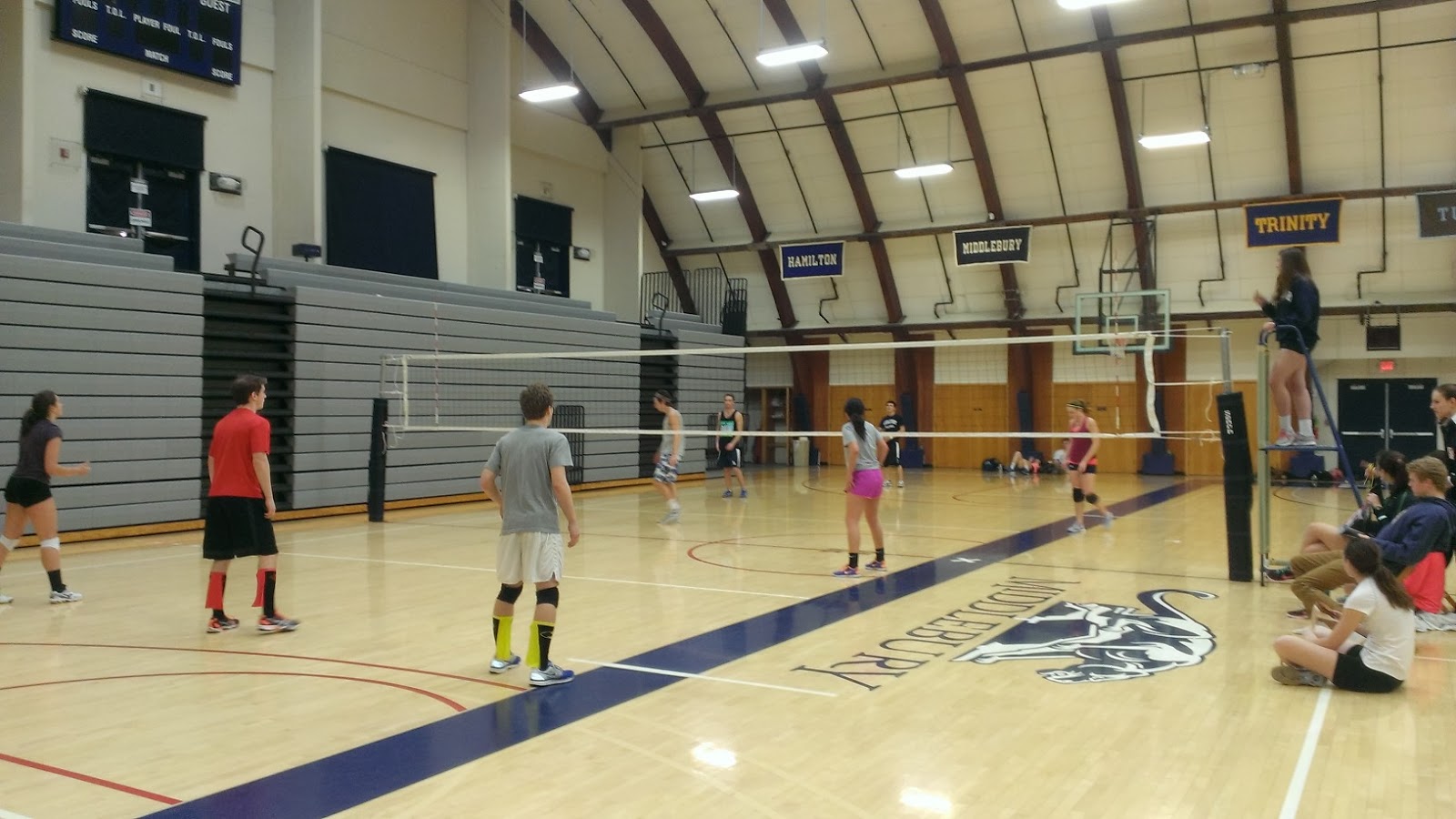 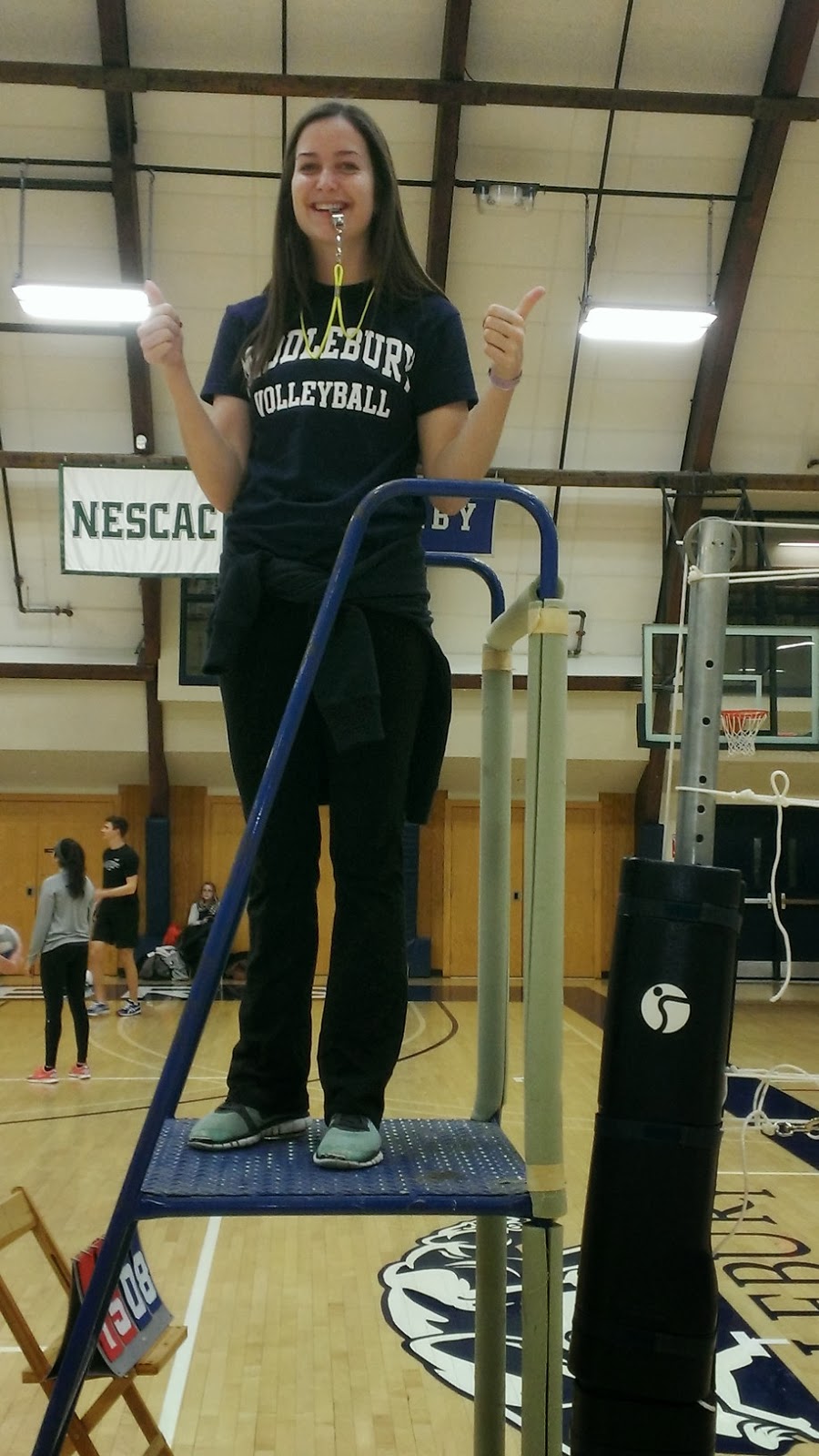 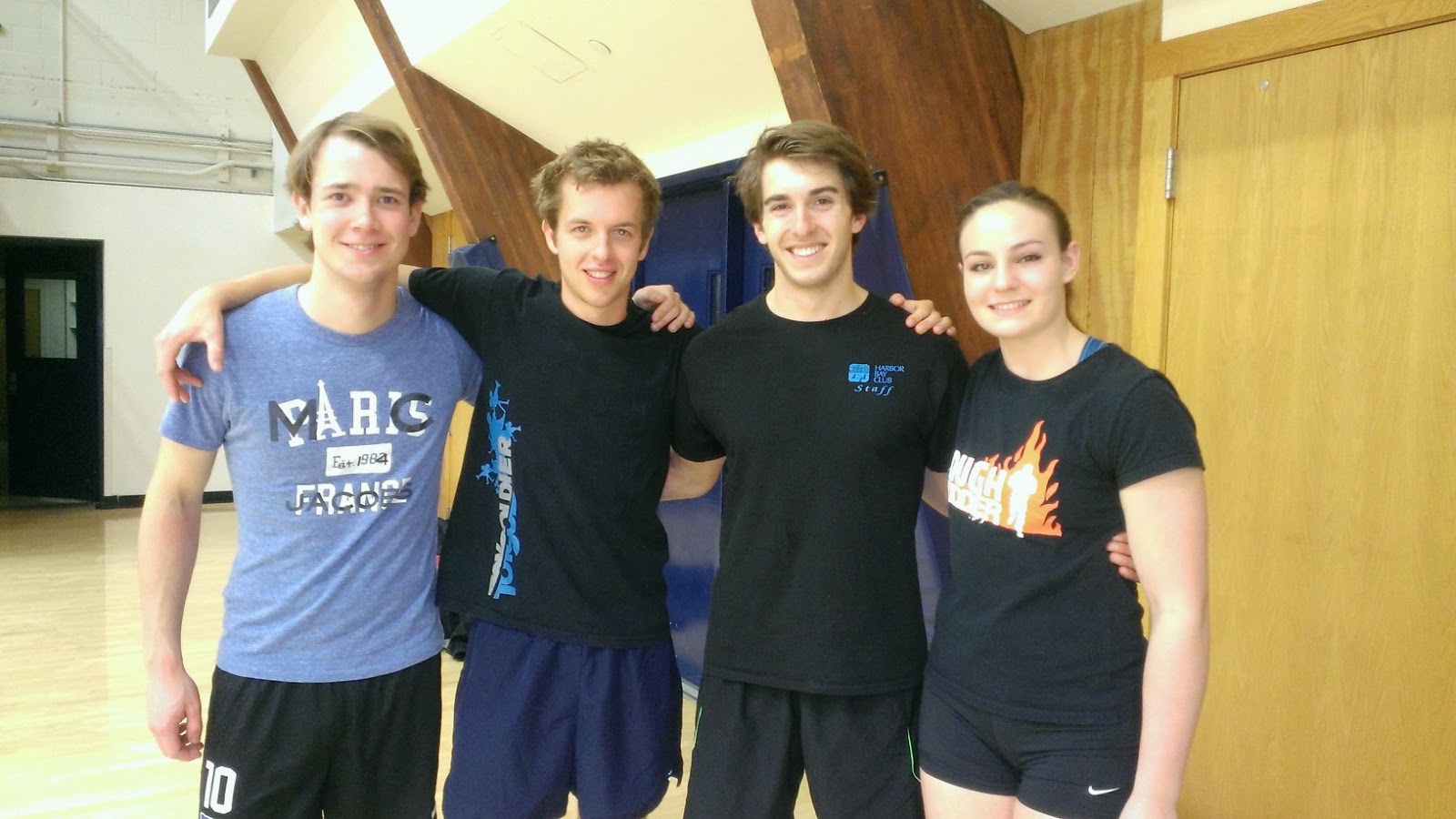 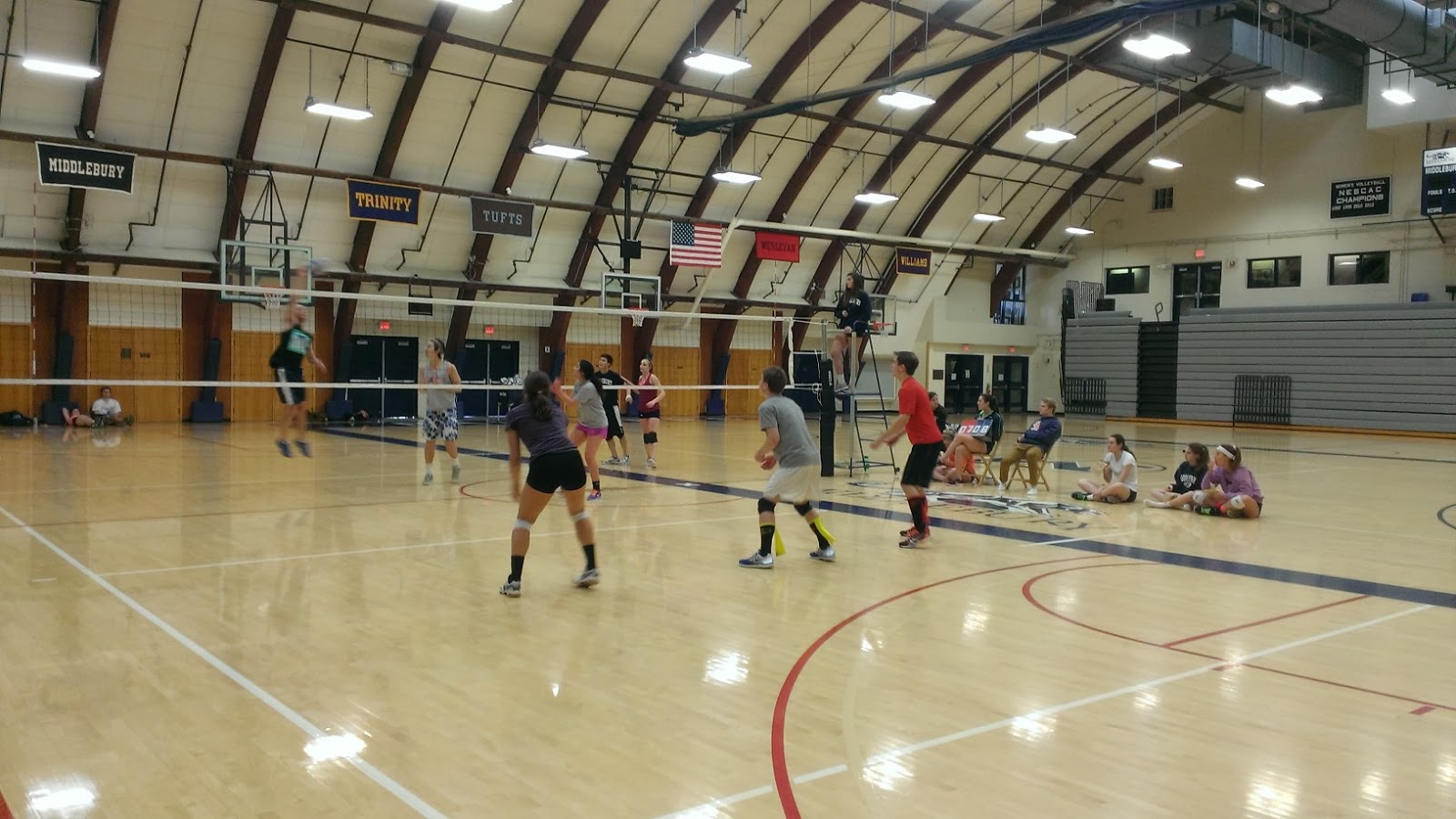 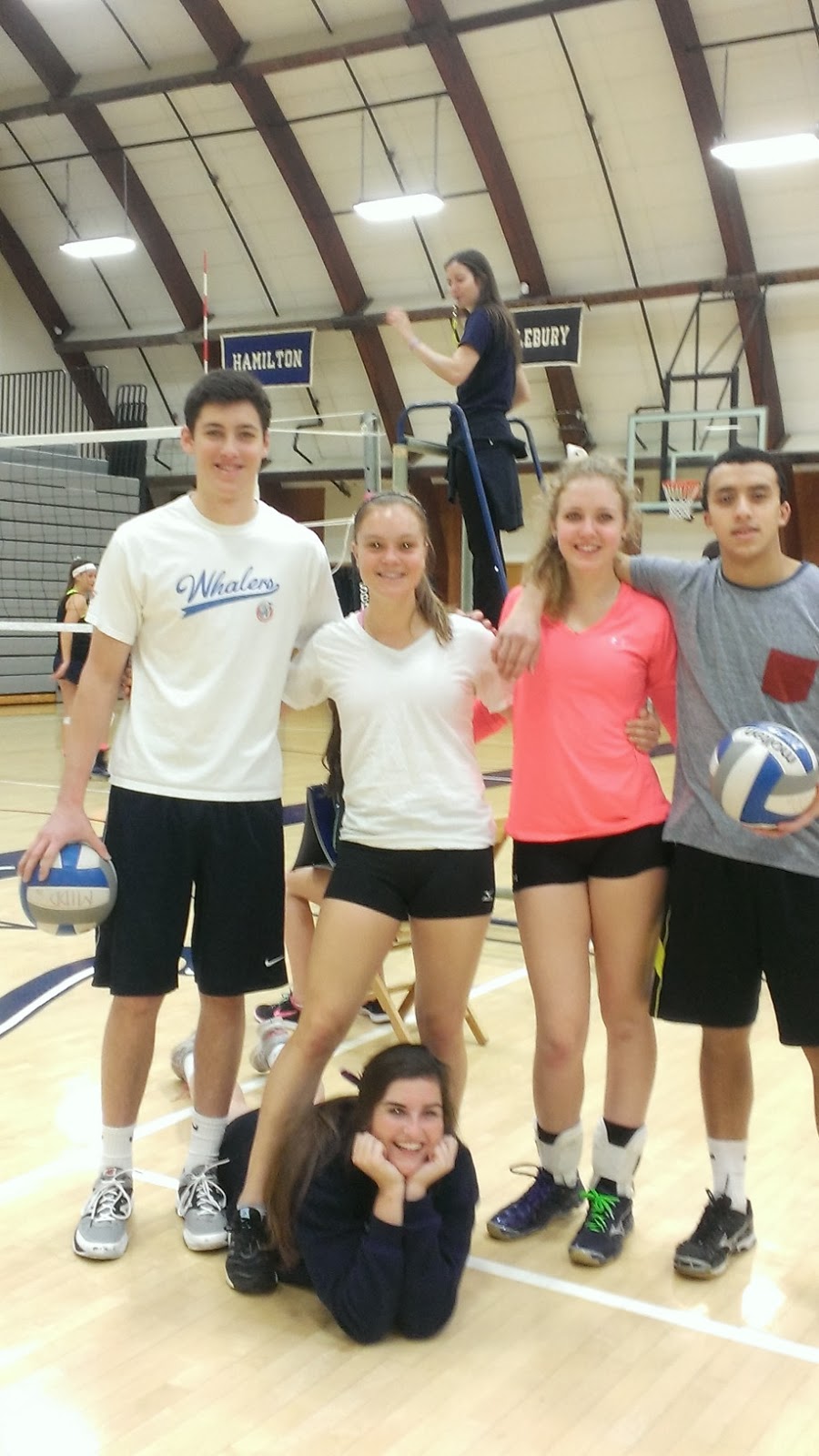 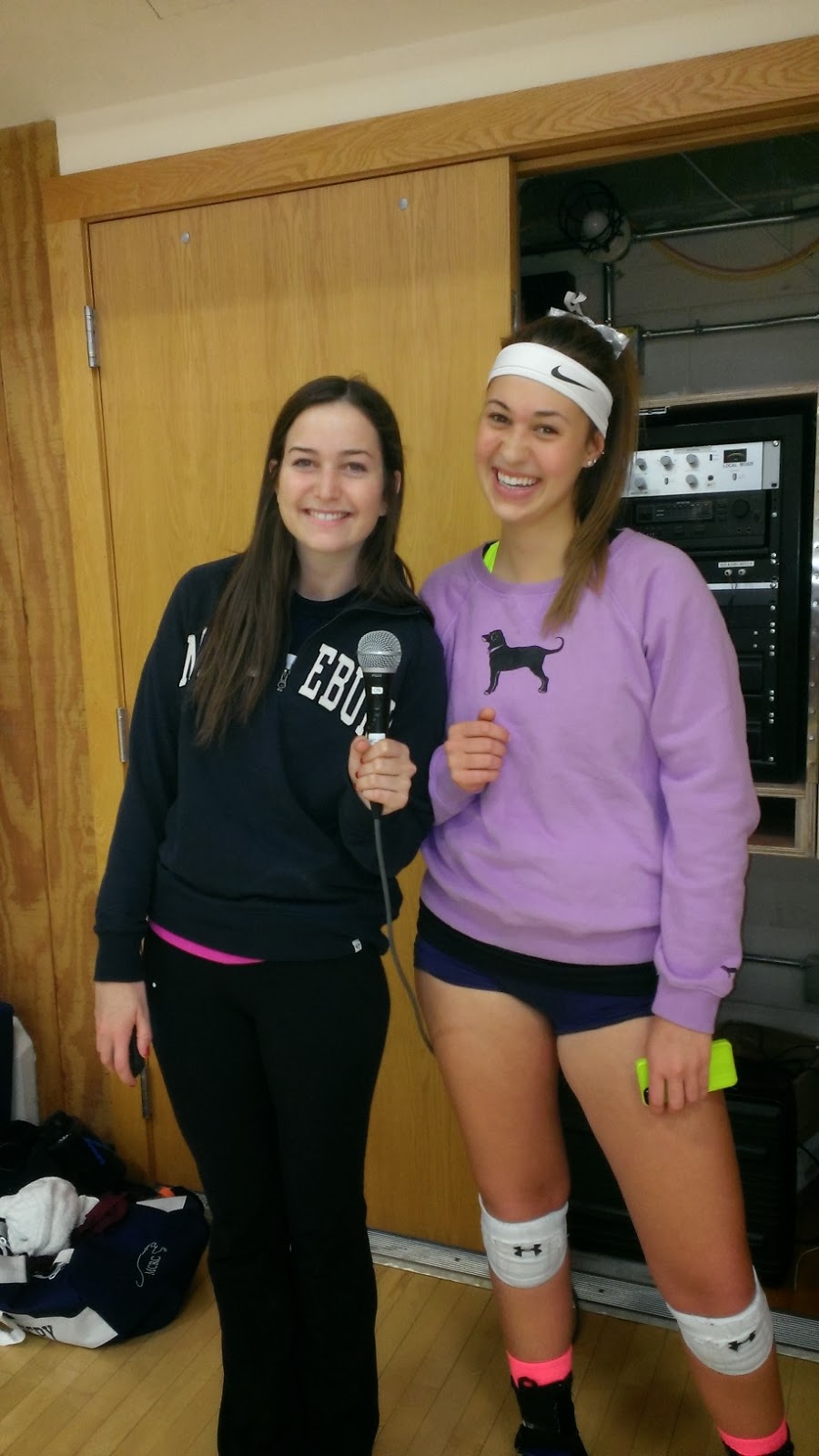 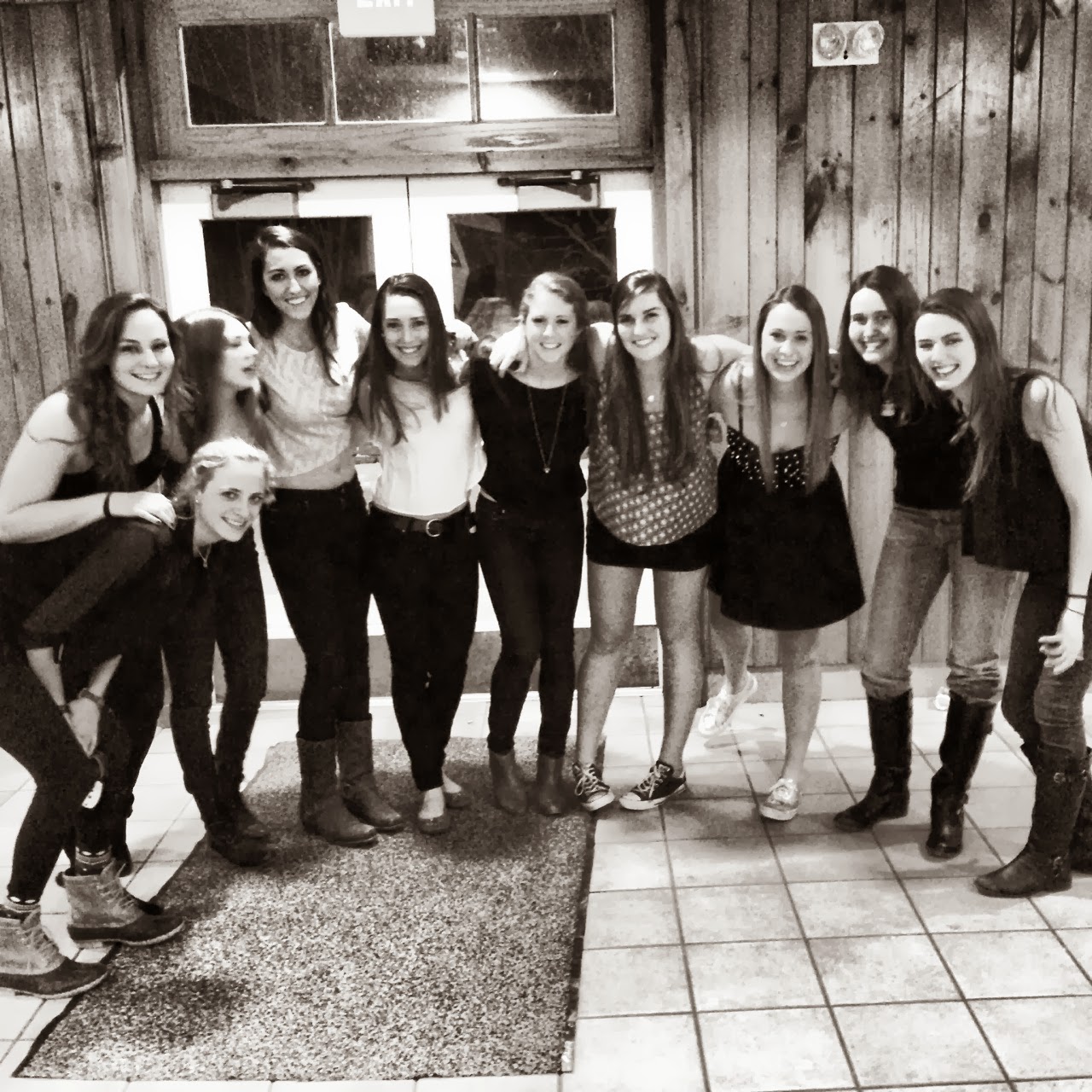 We seem to have several birthdays during the season, which is always fun, and then I usually know about them.  Out of the season, I tend to be a little more out of the loop, and I don't always know what happens with other birthdays.  However, not long ago, most of the team got together to celebrate Lizzy's birthday with her, which was a lot of fun!  The team cleans up well.  And, someone (Jordan?!) made this great poster and hung it in her dorm!  :)  Happy Birthday, Lizzy!! 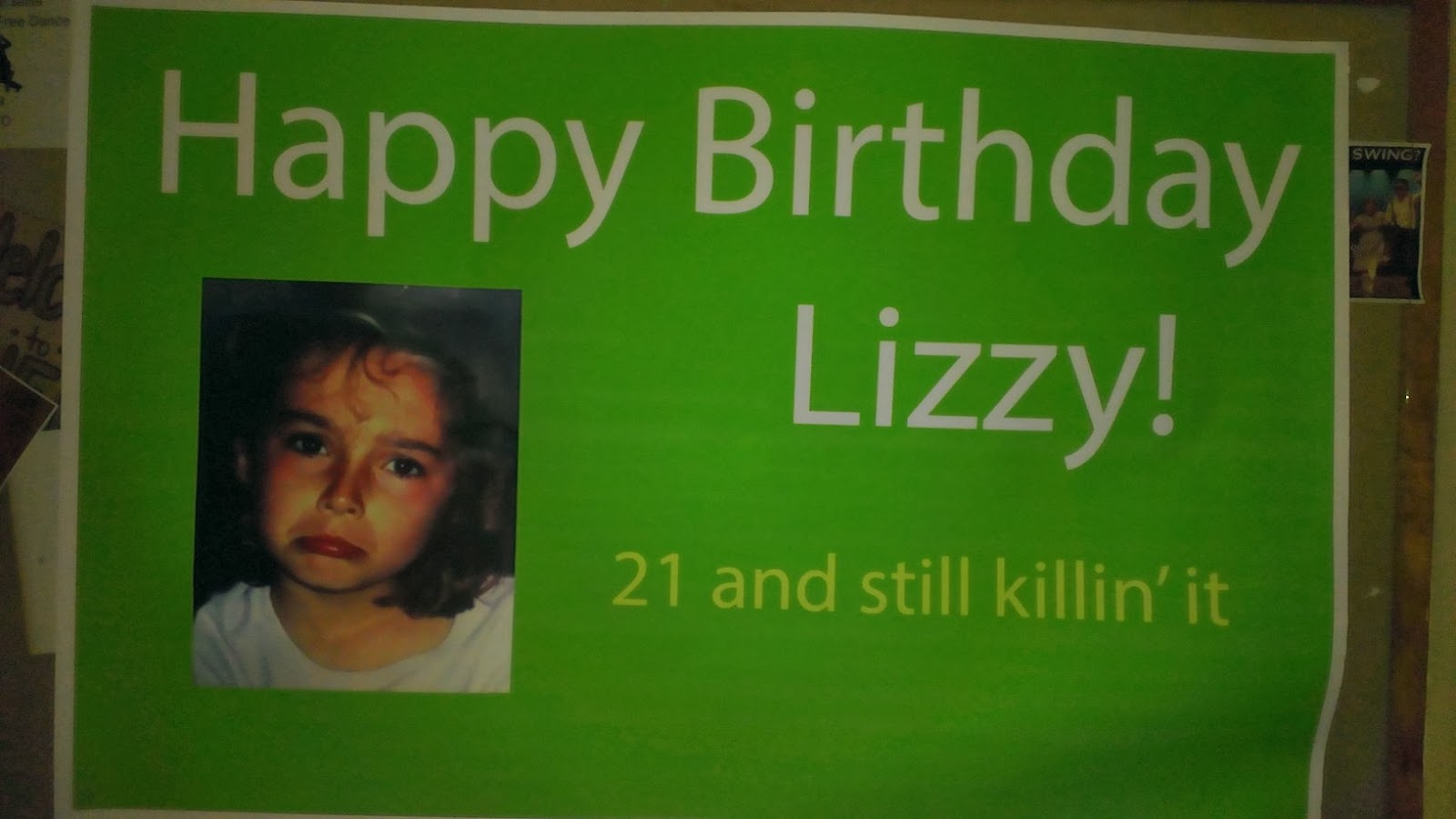