Halloween, Plus a Great Final Weekend of Regular Season 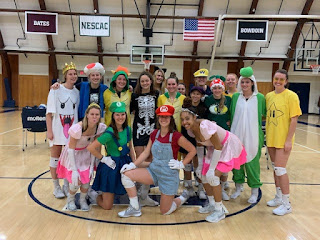 Plymouth State was our final HOME game of the season, and although they were 29-2 coming into the match, they were not nearly as strong of a team as any of our Conference opponents.  Maggie led the way as our only double digit kill leader with 13, followed by Corley with 8.  Then, all three of our RH's had 3 kills, lead by Beth with a .500 hitting %, while Jane hit .252.  Lucy led the team in Blocks with 4, and Gigi once again led the team in digs with 13.  That started our our final week of the season, and we headed to Williams Friday night and then on to Hamilton on Saturday for our final NESCAC weekend.

Halloween fell on Thursday, and we always have a pre-practice Halloween costume picture for fun!  This year the theme was Mario Cart, or something like that!  The team came through with a great turnout of costumes, which was very fun!  We had candy all week in my bucket outside my office door--I'm never really sure about that being a pre-practice snack, but it's only one week of the year, so we all indulge a bit!

We entered the weekend behind Williams in the standings (they were 5-3, and we were 4-4), but since they had to play both us and Amherst, and we had them and Hamilton, we felt strongly that we could leave the weekend with a 6-4 record and take over 5th place for the tournament.  At least we felt in control of our own destiny, which is always a good spot to be in.

After trading points to a 7-7 tie, Williams went on a mini run to get up 2 points, followed by trading points again.  We actually missed three serves in a row down the stretch to help put them up 11-14 with 3 match points to fend off!  We got three kills in a row, one each by Maggie, Laney and Corley to tie the game, which was CLUTCH!!  They had another kill to get another match point at 14-15, but two hitting errors on them, followed by a back row attack kill from Maggie sealed the win for us!!  What a match!  It was great composure for us to come back from 11-14, especially since we'd missed those three serves in a row, so I was really proud of the team for gritting this one out!

We all enjoyed our Thai dinner on the bus that night after the marathon 5 set match, which was nice.  We love our Thai food!  Hamilton started out the next day a little bit the same as we went to extra points to win the first set.  We traded points most of the first set, but we had to fight off 3 set points at 23-24, 25-26, and 26-27.  We missed one opportunity at set point at 25-24, but couldn't convert until two kills (Corley and Jaime) surrounding a Hamilton error sealed the set for us. After that, we cruised to the sweep with scores of 25-15, 25-12 to finish off the regular season.

With those two NESCAC victories, we secured the 5th seed for the Tournament, and will play Amherst in the Quarterfinals next weekend!  We're all excited about that match-up as we feel that we can definitely beat Amherst despite losing in straight sets to them much earlier in the season.  We all feel like we're such a different team at this point in the season than we were back in late September, which is a great feeling.
Posted by sjr at 11:34 AM 2 comments: 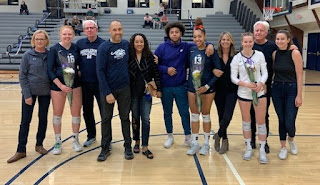 Senior Night is always a fun night.  We only had two home weekends this year, so it was an easy choice to have our "Parents' Weekend" on senior night also.  Our three seniors have given so much to our Program and we're so grateful for their leadership, competitive drive and spirit!  They will be sorely missed next year. 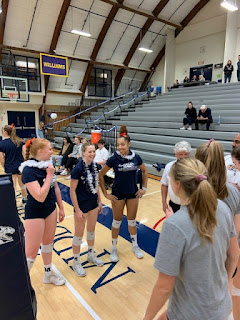 This was not actually their final home match since we had one more mid-week match at home vs Plymouth State, but it's so much better to celebrate senior night with all the families here that we just decided to do it on the weekend! 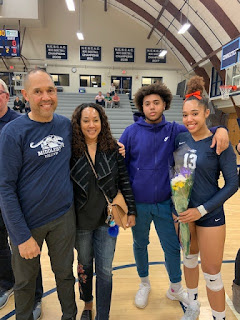 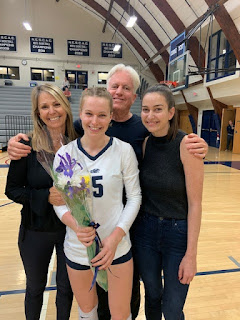 Again, we felt like we competed hard and had moments of greatness, which is all good experiences to grow from and keep improving.  The next day we took on a strong Tufts team with only ONE loss on the season to date and a National ranking of #14 (the highest a NESCAC team has ever been ranked in the National poll!) 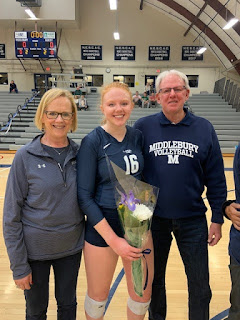 This was when we celebrated Senior Night!  All three seniors were pumped and ready to go as we battled with Tufts.  They got going in the first set and their offense was fast and good, and they jumped out to an early lead and took the first set 15-25.  The second set saw us challenge them more and force the action ourselves as we started to not only pass the ball better, but also get our middles involved and Corley caught fire and they couldn't touch her!  We forced extra points in that second set, but couldn't quite close the deal and lost 24-26.  The final set was more of the same and they got up early 3-8 and we never really challenged them again.

It's good experience to have, as usual, and we will take what we learned from these matches into practice next week and will become better as a result.  We had a wonderful dinner at Flatbread, as has become our tradition.  The team gave the seniors a memory pillow, which was awesome and we all had a fun night of celebrating team and family!!