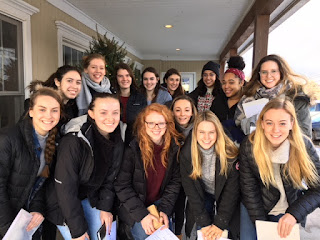 We celebrated our season at Rosie's Restaurant over brunch a couple weeks ago now, and I want to share the pictures from it with everyone.  It was a fun morning and a good way to get the day going for those still studying hard for finals.  A couple of people were actually leaving later that day with finals either being done, or papers that could be handed in on-line.

It's so hard to go from seeing the team every day to only seeing them once in a while, so I always look forward to the banquet because it's usually the first time I'll see the team all together since the last day of our season. 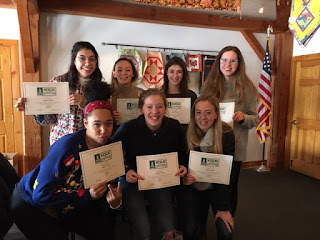 The first people I want to recognize from our banquet are the 7 Nescac All-Academic players.  This is something we pride ourselves on, and this group kept up the exceptional work in the classroom as well as on the court, so I'm proud to recognize these 7:  Sarah, Emily, Becca, Eliana, Chellsa, Alice and Isabel.  Great job, guys!! 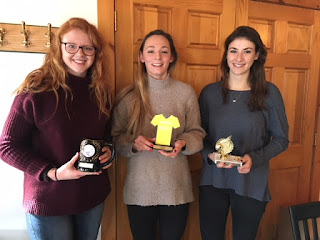 Next, we want to recognize our Team award winners.  The team votes for three awards.  We have the MCVB Spirit Award to recognize the person who consistently demonstrates the positive spirit of MCVB.  That award went to Beth Neal.  The team also votes on the Yellow Jersey Award (think Tour de France).  This award recognizes the person who gives consistent effort and works hard to become a better player every day in practice.  This award went to Emily Kolodka.  The final award is the Panther Pride Award which recognizes a player for being the best teammate.  Becca was awarded this for making those around her better by holding herself and others accountable to a high standard of excellence, while also being supportive and understanding. 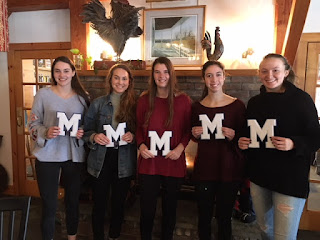 Next, we honor our freshmen for getting their Varsity Letter.  Physical Education is a graduation requirement at MIDD, so every freshman athlete gets one credit out of the way by playing a varsity sport.  In the Physical Education Department, one has to demonstrate breadth of activity, not depth, so they only get one PE credit for volleyball, even playing 4 years.  (As the Director of PE, I fully support this!)  We've had people do fun things with their letters like make a Varsity Letter Jacket (very cool!), and a Holiday stocking with the M on it.  Congrats to our freshmen for earning their Varsity M! 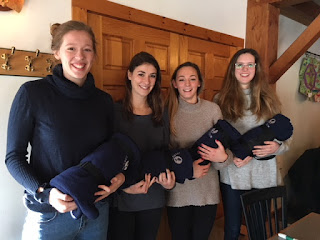 Our seniors are a focal point of the banquet also and although we don't have them give speeches (perhaps that's a good idea for the future), it's nice to honor them for their dedication to the Program for four years.  To show my appreciation, I've given the seniors a fleece blanket embroidered with their # on it for several years now, maybe decades?!  :)

We also honor the captains for this year and thank them for all the hard work they do keeping the team together, helping the communication lines between the team and the coaches stay active and helping motivate and organize the team, so a big THANK YOU to Becca, Emily and Sarah. 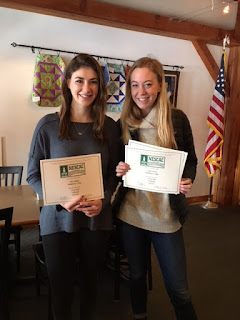 We also want to be sure to recognize our two All-NESCAC honorees, so we presented both Becca and Isabel with their All-NESCAC certificates for 1st team and 2nd Team respectively.  With the depth of talent in the NESCAC, it's a very high honor to be selected as one of the top players in the Conference.  Becca was also a member of the All-Sportsmanship Team for NESCAC, as voted on by her teammates.  Of the 763 student athletes named to the All-Academic Team, only 4 across all 11 institutions were named to ALL three teams:  All-Academic, All-NESCAC, and All-Sportsmanship, and Becca was one of those 4!

In addition, this year, ALL FOUR seniors were honored by the NEWVA (New England Women's Volleyball Association) by being asked to take part in the Senior Classic.  This is an event that brings the top seniors in New England together for some fun skill competitions and then they play a final match.  This event happens at a tough time for us with our beak schedule, and finals, and the distance we have to travel just to get there, so unfortunately, they were unable to go, but it was a great honor that all four were selected for this.

It was a great season overall, despite the fact it didn't quite finish the way we were hoping, but we have lots of things to work on in the off season to prepare for next year.  It's like we say after every loss, as long as we learn something from this experience that will make us better in the future, it's all OK.  I'm looking forward to doing some fun things with the team in the off season like skating, golfing, paddle tennis or squash, and who knows what else.  I've already gone to an a capella concert by Gigi's group (fantastic), and hopefully I'll get to more of other people's events, too.  Happy Holidays to everyone, and here's to a great New Year!!
Posted by sjr at 11:01 AM 3 comments: