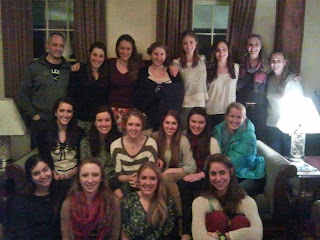 Another season come and gone.  It seems to happen faster and faster, but maybe that's my age?!  At this point in the season when we try to find a time for our Banquet, I'm amazed that we ever can all come together for practice at the same time.  Finding a time that "works for everyone" is practically impossible, but somehow we pull it off every year.  The Waybury Inn was the location of our dinner this year, and it was a fabulous evening!  A huge THANK YOU to Piper's parents for organizing our dinner!!  That's a huge help, and much appreciated!!

The official reason for having our Banquet is to celebrate our season, but the "real" reason is to get together again and share food and friendship.  Let's face it, we all love to eat and talk!  It's a very busy time of the year for everyone, but it's nice to get back together as a team to celebrate our successes and efforts from the season.

Each year the players vote on our Team Awards, and the award winners this year were the following:

Contribution on the Court:  Julia Gibbs--probably one of the most all-around, fundamentally sound players we've ever had--great recognition from her teammates for this award, and very deserving.

Contribution off Court:  Meg Anderson--consistently very positive and hard-working regardless of score, side of the net in practice, whether playing or not in games.  Meg has a wonderful perspective and is always enthusiastic--again, great recognition by her teammates for her special efforts.

MCVB Spirit:  Nicki--two years in a row now, she may "define" the MCVB Spirit!!  Bringing the spirit to practice, the bench, the court, the bus...gotta love the spirit!!

Most Improved:  Kathryn was recognized for really stepping up as the season went on and when called upon to play in games, she shed any hesitations as a freshman and took control of our offense.  She steadied our offense and the court, helping to propel us to the NESCAC Championship--well done!! 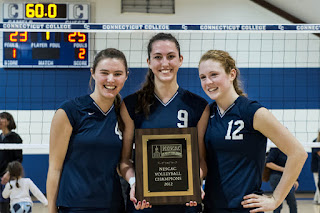 Captains for 2013:  Meg, MJ, and Amy--a great combination of talents, on and off the court.  I'm looking forward to working with these three, and am confident in and excited about their leadership abilities! 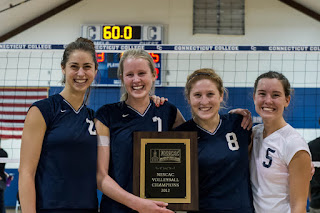 For our SENIORS, this is truly the end, but just as "commencement" is the term for the graduation ceremony, this is their "beginning" of being an MCVB Alum!  We'll do our best to keep track of them, and hopefully they'll follow us on-line next year from wherever they are!  I want to recognize our four, fabulous seniors for their tremendous careers:

Sarah Studwell played very important roles throughout her career, and had the versatility and athleticism to play many different positions.    She was mainly an outside, both front row and back, but also played as a back-up middle hitter, stepping in during a critical 5th game against Endicott last year (which we won!)  She capped off her career with a fabulous senior season at OH/DS, and especially stepped up during the NESCAC Tournament and was brilliant!  She was digging a ton of very hard hit balls right up to Kathryn, and served up 5 aces in the semifinal against Bowdoin.  Great stuff, Stud!!

Julia Gibbs had a tremendous career, starting with being named the NESCAC Rookie of the Year her freshman year, and being named 2nd Team All-NESCAC each of the next three years.  As we said above, she's one of the most all-around fundamentally sound players I've coached.  Her versatility to step in and become our full-time setter last year, and lead us to the NCAA Regional Final was inspiring.  This year, her cumulative stats were thrown off due to spending half the season setting before switching back to her original position of right side hitter.  It was great to have her back in serve receive, and hitting from both the front row and the back.  She was 2nd on the team in service aces, digs, assists, and reception percentage, and has also been recognized as an Honorable Mention All-American, and All-Region selection during her career!  Wonderful job all-around, Julia!!

Maddie Firestone just kept getting better every year.  From backwards footwork and a powerful arm swing her freshman year to a blocking machine her senior year--I loved every minute of working with Maddie "Rookie" Firestone.  Maddie played a crucial role in our first NESCAC Championship run her sophomore year by stepping in for an injured Whitney Bean in the heart of our Nescac schedule during the regular season.  We went on a tear during that stretch and narrowly missed hosting, but claimed the 2nd seed, and eventual Championship!  Even when she stole Colby's camera tripod (by accident!) she managed to make us all smile with her.  As a starter the past two years, Maddie was a consistent offensive force tying for 2nd on the team in hitting % among the hitters this past year.  She capped off her career as a captain, showing great leadership and maturity--great stuff, Maddie!!

Caitlin Barrett came in as one of our "younger sisters"--she was part of the third set of sisters to play for me.  Caitlin's competitive spirit, work ethic, and ability to dig and pass balls in places we could never tell her to be was amazing to witness.  I'm not sure how many times I said to her, just go where YOU think the ball will be--you have free reign to wander...Her command of the backcourt and leadership on and off the court helped set the tone for the team and was a huge reason for our success.  In addition to absolutely single handedly saving tons of rallies from ending by getting her body under balls that were practically (but not quite) down on the ground, leading her to be named Defensive Player of the Year in NESCAC.  Amazing career, Caitlin!! 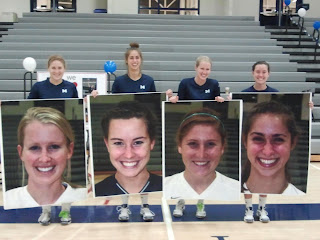 As a class, these seniors won 2 NESCAC Championships, had a combined record of 91-28 over their four years, had four 20-win seasons, advanced to the NCAA's three straight years, making it to the Regional Finals once, and the semi-finals twice.  They've been awarded the Team Academic Award by both the NEWVA and the AVCA every year, and all four have been Academic All-NESCAC!  I'm not sure we've ever had such a power-packed senior class, so thank you all for all of your efforts, and for all you've given to the MCVB Program!! 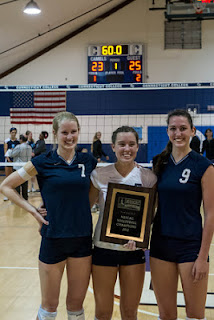 Now, for our captains this year:  First, as a junior Captain, MJ did a fantastic job of leading by example with her competitiveness both in practice and in games.  Her no-nonsense determination set a steady example, and she was a quiet force on the court.  She could change the energy with one show-stopping powerful kill that as a freshman would have elicited a look like, "whaaaat???" which now was a "Lets GO!" inspiration to the team.  Thank you, MJ!

Maddie always had the youthful exuberance that probably led to her nickname of "Rookie!"  She would bound on and off the court as middles exchanges with the libero, immediately energizing the floor and bench respectively.  When she stuffed an opposing middle at key times, her reaction inspired the team with confidence and propelled us on to victory!  She was an approachable leader, a good listener, and a good communicator, adding up to be a fabulous captain.  Thank you, Maddie!

Caitlin was the consummate floor leader.  She was always talking, and communicating on the court, and kept the energy alive just like she kept balls alive in the back court.  She's been our anchor on defense for three solid years now, and provided an extremely solid base of leadership on and off the court, and was a wonderful liaison between the players and the coaching staff.  Thank you, Caitlin! 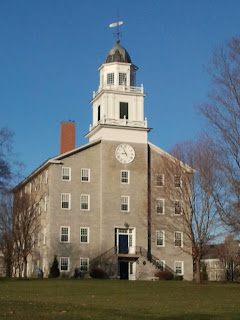 The other people we wanted to recognize were those not in uniform for us, but still a huge part of our Team:  Rachel, Steve and Max!  Rachel keeps the team all patched up, and healthy, and unfortunately, we tend to spend a lot of time down there.  I keep telling them to hang out with Rachel "socially," not "professionally!"  Thank you, Rachel!  Steve keeps our academic lives in tact, and helps smooth out any issues in that arena that sometimes can be a little sticky, not to mention being a great fan along with his family!  Thank you, Steve!  And, Max keeps us organized in practice, and on the road by keeping score, taking stats, tossing balls--she's a jack-of-all-trades on the team, and is a huge help to me, and a wonderful friend and important Teammate!  Thank you, Max!

In addition to all of this, and in many ways one of the most important awards that can be given out at a school like Middlebury is the Academic All-NESCAC award!  Only sophomores and up are eligible for this award, so of our 11 players that were eligible, 8 received this award, which is amazing, and a tribute to the caliber of student-athlete that we have on our Team.  The following were awarded this nice honor:

Way to go, TEAM!!  Thank you all for sharing the season, and the evening.  Good luck with all your work as the last week of classes comes to an end, and good luck on Finals next week!  As the juniors all head abroad, the sophomores will take over the organization of any off-season activities, and my guess is that the seniors will still want to play when possible!
Posted by sjr at 10:52 AM No comments: