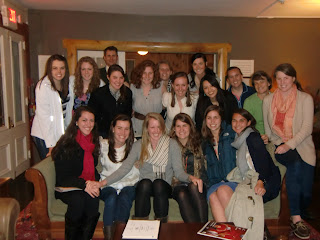 We changed our venue this year for our end of season banquet. Instead of Fire and Ice, or Brian's picturesque Vermont house, we decided to go to the nearby Waybury Inn. We had our own private dining room, and we ate in style. Thanks to our parents generous donations of food this year, we were able to actually pay for the banquet from our budget, so that was a nice switch! Both Rachel and Steve were able to join us, too, which was great. We were missing Brian, which was too bad. However, since he was at Disney World with his kids, we didn't feel all that bad for him though. :)

It was great to reconnect as a whole team, and to celebrate just being together again. Our reason for the banquet, however, is to honor each member of the team for their contributions to the team, and for being such great ambassadors to Middlebury College. Thus, everyone received the Middlebury "M" and a Certificate of Participation from the Middlebury College Department of Athletics (in addition to one PE credit toward graduation!) It's the old fashioned type of letter that can be sewn on a jacket or a sweater, as it was in the "old days." I believe that this letter has been handed out to Midd Athletes forever, which is a fun tradition.
The TEAM Awards that were voted on by the team this year were the "Tough as Nails" award, the "Glue" award, the "Spirit" award, and the "Most Improved". And, here are the results:

The "Tough as Nails" award went to both Lauren and Caitlin, and recognized them for being tough throughout the season, in practice and in games, and just in general! (Maybe it's in the genes?)

The "Glue" award went to Julia, who helped bring the team together, and kept the team together in many ways!
The "Spirit" award went to Elissa, who's energy and enthusiasm were contagious!
The "Most Improved" went to both Maddie and Stud, for really working hard to improve their respective games in the off-season, and also from the beginning of the season to the end! 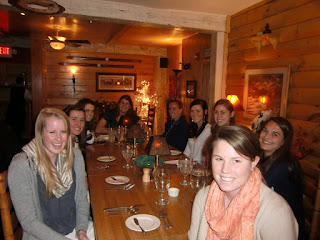 It's also a time to recognize our captains and the important job that they do during the season, and also to thank our seniors for all they've given the Program over their years here.
As for the captains, they did a fantastic job this year. They were a good pair, and their different leadership styles worked well together. Lauren was our floor general. She ran the offense, and kept everyone involved, and really distributed the ball well. She lead by example, and although she can certainly speak up when need be, she was rarely long on words. Jane was more of our sentimental and emotional leader both through her actions, and her words and enthusiasm. The work they do all season long, and also during the off-season is a main reason for our success.
For the seniors, I was delinquent in ordering their traditional navy blue fleece blankets embroidered with Middlebury and their # on it, so I had nothing to give them but my sincere thanks. The two seniors have given so much of themselves to this team over the years. I think beating Williams for the first time in their careers, (and TWICE) had to be a great moment for those two seniors. However, winning the NESCAC Tournament had to clearly be the career highlight. 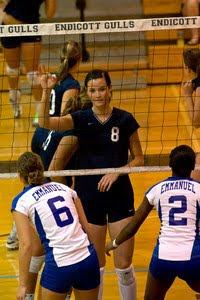 I would describe Whit as an "old soul" because in my mind she had a mature nature about her since the day she arrived in MIDD. When out for any reason, she would just go about her business, and get back out there as soon as possible without any drama--EVER. That presence of mind and spirit was a calming force for us, and had a very large impact on the team morale and focus. I think Whit was a wonderful mentor and role model, and we'll all miss her very much.


Despite Lauren's outward quietness at first, there was never a doubt about her control on the court. Lauren's ability as a setter, and her competitive, nerves of steel nature made her an instant leader on the team. Being named a junior captain really demonstrated the impact she had on the team, and the team rallied around her to reach greater heights each year. She broke most of the setting records for both a single season, and for a career, which is impressive. I think it's Lauren's unique and dynamic personality, her wit, and her dry sense of humor that I'll miss the most. 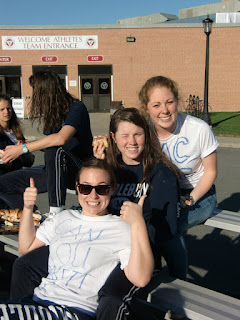 Getting to know people like Lauren and Whitney, not just as volleyball players, but as people is the true perk of my job. The changes that players go through from a recruit, to a rookie, to an upperclassman, to a senior, and then on to an alum are just really fun to witness, and share. I will miss these two seniors both as players and as people, but I'll always look forward to their return to campus, or seeing them in the stands on the road, or getting an email about a new job, a wedding, or a baby!
NICE JOB, everyone! Fun times! Thank you for all the great memories!
Posted by sjr at 10:37 PM No comments: