Season Wraps Up with Banquet at Swift House 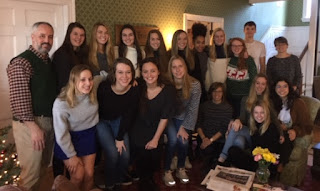 Just before finals started, we took some time last weekend to wrap up our season with our team banquet.  The parents graciously helped out, so we celebrated our season in style with brunch at the Swift House!  Good food is always a high priority on our list, so it was a perfect way to celebrate our season. 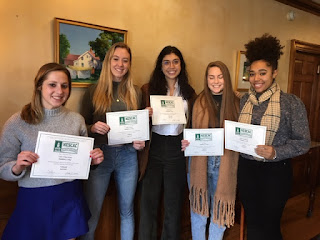 We handed out the many previously announced awards honoring our team members for their accomplishments on the court, and in the classroom.  The first picture features our Academic All-NESCAC members, so a big shout out to those 5 (Claire, Isabel, Sarah, El, and Chellsa) for getting that nice honor.  Well done!!

The next picture is our Freshman class with their official Middlebury Varsity Letters!  It's actually an old tradition that I still love.  Many have put their letters on blankets, but Chellsa had hers made into a jacket, which was very cool! 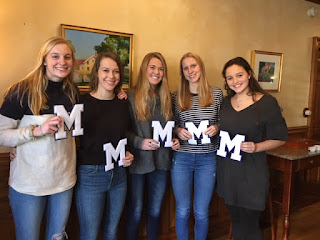 Then we have a picture of our Team Award Winners.  Beth got the MCVB Spirit Award; Sarah got the Panther Pride Award, and Jane got the Yellow Jersey Award.

The MCVB Spirit Award is given to the player whom her teammates felt consistently demonstrated the positive spirit of Middlebury Volleyball.  Some of the comments for Beth included the following:  "positive force on this team," "no matter the situation, Beth was always ready to compliment and encourage her teammates," "extremely selfless teammate," "made great efforts to keep everyone engaged on and off the court," and "positive mindset and always encouraging." 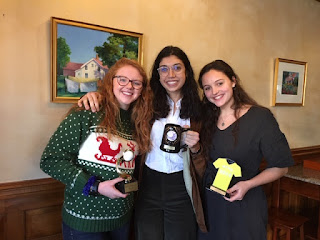 The Panther Pride Award is meant to honor the person who was the best teammate.  This person should be someone who made those around her better by holding themselves and their teammates accountable to a high standard of excellence, both on and off the court.  Some of the comments about Sarah included: "Always put the team before herself," "motivating spirit, she held the team to a higher standard and expected the best from her teammates on and off the court," "vocal leader and constant source of energy for the team, but also realistic and accountable," " made each of us better players and inspired me to be a better friend."  She was also described as a "team mom." :)

The Yellow Jersey Award is to recognize the person who we felt gave consistent effort in practice on a daily basis throughout the season.  I think it originated from the idea of the Yellow Jersey in the Tour de France years ago...Some of the comments about Jane included: "gave consistent effort in practice and made sure others were doing the same," " always made the effort to keep her game at a constant level to make the team stronger and better every day," " holds herself to a high standard and was a good role model for work ethic." 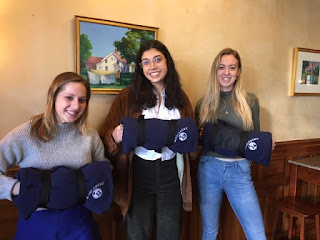 These are some very nice words for our award winners from their teammates and is a nice culmination of our season.  We strive for the unity of a family and the push and motivation of competitors, but always with a positivism that binds us together and keeps us moving forward as ONE.  We are MCVB!! 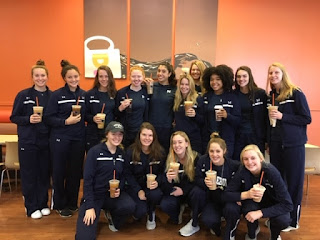 As has been my custom for a long time now, I get a Middlebury Blue fleece blanket with their number embroidered onto for each of the seniors.  I've probably been doing this for almost 20 years (?).  If any alumni are reading this and still have theirs, it would be fun to see a picture of you with yours and I'll create a collage! 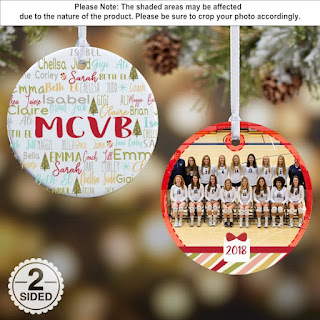 We also honored our current captains for all the tireless work that they did helping make our season as successful and drama-free as possible.  I had mugs made (since we all like our coffee) with the team picture at one of our Dunkin' stops during the season so they can think of all of us as they enjoy a cup of coffee now in the off-season.


Plus, we had tree ornaments made for Jack, Jill and Judd of the team on one side, and our "family" names on the back. 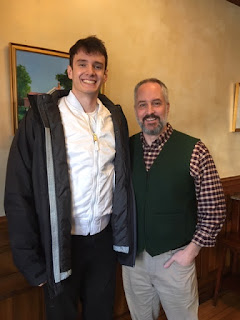 Jill had to leave early, and so did Judd, so I got a picture of the "fellas" on the coaching staff.  We had a real staff this year with not only Brian and I, but also Jack was back for his second year coaching, and Jill (who played at UVM, and is the current HS tennis coach) helped us out at most practices.  Additionally, we also had occasional help from Jesse (who played at UVM and has done college coaching and officiating).  He was able to come for the end of some practices and a few home matches.  We're hoping to have them all back to help again next year, which would be great.


The final two pictures are of our middle two classes (who weren't already featured).  Fun times, and now everyone can focus on finishing up their finals and going home for break.  Gigi is actually leaving campus for the rest of the year as she heads abroad for J-term and Spring term, while  Chellsa will be returning for J-term and departing after that for her abroad experience.  Our final junior, Beth, is staying on campus and running track again this year, so at least we'll have her around!  That puts the sophomores in charge of our off-season activities, so it'll be a nice opportunity for that class to step up and be leaders. 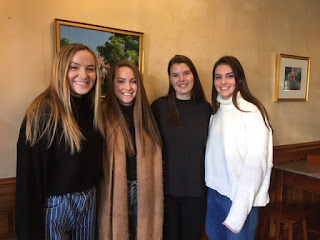 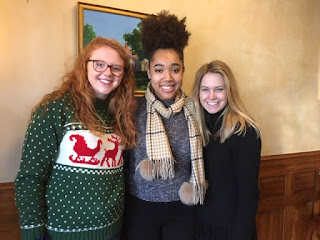 Happy Holidays to you all!  Regardless of what Holiday you're celebrating, I hope it's a restful, thankful and emotionally energizing time of the year for you.  The start of a new year, even in the middle of a school year, is a wonderful time to reflect and be thankful for all that we have that's good and positive, but also a good time of year to re-evaluate what's important and make some strides to be better versions of ourselves in the new year.  Enjoy!