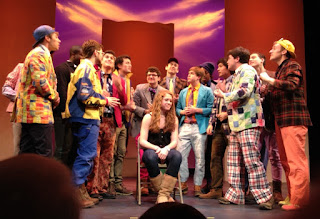 I'm not sure how many of us have ever been serenaded quite so famously before?! Judging by the reaction to the Dartmouth Aires of a few people in the front row, I think some of them would have paid BIG money to be in Amy's shoes in this picture!!

Amy and Julia are both members of the Mischords a cappella singing group here on campus. Amy's brother is a member of an a cappella group in addition to the men's club volleyball team at Dartmouth College. The Dartmouth Aires were runners-up on Season 3 of NBC's The Sing-Off. They have received a lot of publicity surrounding the show, which aired this Fall, and have released a new album and are touring New England and beyond. Our Town Hall Theater booked them to come and perform, and it was a highlighted event in town which sold out very quickly.

The Dartmouth Aires is the oldest male a cappella group at Dartmouth dating from 1946. Our female counterpart with that tradition is the Middlebury Mischords--the oldest all female a cappella group dating back to 1962. The Town Hall Theater thought it would be perfect to ask the Mishchords to open for the Aires. What they didn't know was that this would bring together two siblings, resulting in a fabulous display of Hart talent!! In the picture above, Amy is being serenaded by the Aires in a song called, "Amy." Will told the audience how special it was for him to be here singing in the same show as his sister, and wanted to do a special number. This "contraband" picture shows them both on stage together! (I'll never reveal my source!) :)

The Dartmouth Aires may have been the headlined show, but the Mischords provided the audience with a real treat. Amy had several solo's which was really fun. Julia also had some solo parts, and seemed to be one of the leaders for the "other sounds" in the background of the main singer. (I'm showing my terrible idiocy in all things musical right now, I'm afraid!) At any rate, Julia was fantastic at whatever that is called, along with her dancing and general stage presence!

I tried much too late to get a ticket since it sold out so quickly, but was fortunate that one of the Hart's friends was unable to come at the last minute. Amy texted me and I gladly accepted and had a seat next to Mr. Hart, which was very special treat for me. MJ and Meg were also in the audience to enjoy the music and support their teammates! What a wonderful night of great music and a great show! The Aires really put on a show in addition to their music. It started with their comedic outfits and stage antics, but was very high energy, fun, and funny in addition to singing some great music. Mr. and Mrs. Hart had to be so proud to have both kids shining on the same stage! FUN, FUN!
Posted by sjr at 11:24 AM No comments: