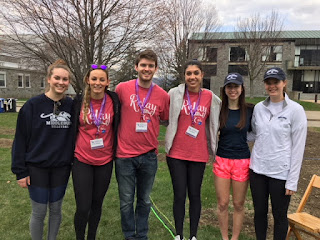 Our players are involved in a lot of different community service events as individuals and one of the main ones we do as a Team is Relay for Life!  Three members of our team were especially involved as Event Organizers for this big day, and they were Emily, Sarah and Beth.  Kudos to the three of you for your extra efforts all year (and years) raising money and organizing for this special event! 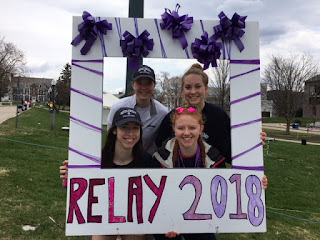 Most of the team came out at one point or another, and I got pictures of most of them.  Beth, Sarah and Emily were there all day, setting up, running the show and making sure it all went as planned, including dealing with the rain.  We made it through most of the event before the heavier rain started, and they even moved the luminaria celebration inside, along with the closing ceremony.  The rain actually ended with about an hour left so people could still get some laps in as darkness was setting in. As you can see from the "check-in tent picture" below with Beth and Sarah that it was a little chilly at times, although we may credit the hat that Sarah's wearing to her southern California upbringing...I'm not sure it was actually THAT cold!  ha ha... 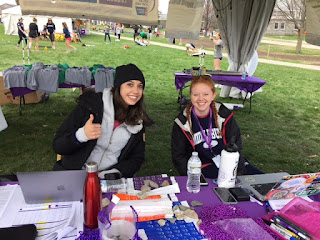 Becca Grais, Shea, and El were all there for a bit also, which was great, and I saw Becca and Eliana briefly late afternoon before the rain really kicked in.  Jack and Emily have both been involved for many years now, and since it was their final Relay, I had to get a picture of the two of them, and they were nice enough to allow me to take a picture "for the Blog!"  Thanks guys!  And, really, thank you for all that you've done over the years for Relay.  It's a great event, and there's probably not a single one of us who don't know someone affected by cancer, and for most of us, it's multiple people.  I know for sure you were both involved last year as well, and maybe all four years? 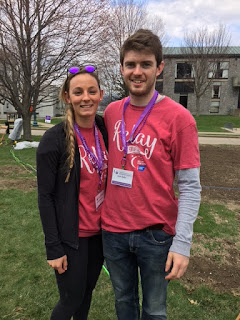 The American Cancer Society continues to make strides, and the young student speaker who was diagnosed as a very young child thanked everyone involved because he credits his quality of life to the strides they've made with treatments, which is so encouraging to hear.  In his speech he mentioned working at a camp for young children with cancer, and he said the reactions from parents who see him there and hear his story are uplifting as they look at him now in college and can picture their children surviving this disease, and he could see the HOPE in their eyes and in their face, and that's such a special thing.  Let's keep working for more success stories!! 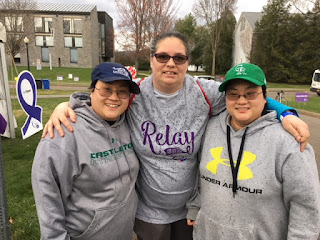 The final picture here is our friends from Special Olympics, Kate, Sam and Cari.  They used to be super fans a few years ago, so we're going to have to work on getting them back to our games, but they turned up for Relay and we had a great time catching up!

Well, it's really starting to look and feel like Spring here, finally, so Happy Spring, everyone!  Graduation is in a little over three weeks, believe it or not!  That will be our final farewell to Emily, Becca, Alice and Eliana as student MCVBers....because they're now Alumnae MCVB!  We'll welcome them back to MIDD forever as alumnae of both our own MCVB family and the Middlebury College community!!