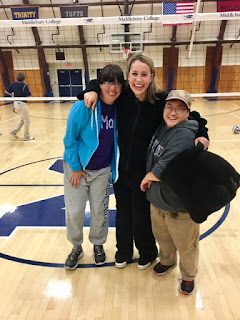 I'm a little behind, so we started our home stand last week on Tuesday night vs St. Mikes.  It was a match of strings, swinging both in our favor and against.  The 2nd set was the closest of the match, having to come from behind to pull out a 25-23 win.  After that, I think we wore them down and we finished off the final set quickly with a 25-12 win.  It was great to see us start to come together, which hopefully will be a trend that continues.  Chellsa continues to run the offense and serve tough.  Isabel led the team with 13 kills with the hot hand, followed by Alice with 9 kills and no errors--both hit well over .300!  Mel also had a no error night with 4 kills on 7 swings for a .571 night, and Chellsa chipped in with three kills of her own.  Gigi made her first appearance and did a great job.  All in all, it was a good team win. 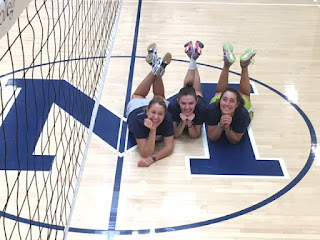 That weekend was Homecoming, and we had two more home games for a three game Home Stand last week.  It was great to be home for homecoming!!  There was so much going on, and we got to be a part of it, for once!  We started it all off with a 3-0 sweep of Hamilton on Friday night.  A very close first set was followed by two more that featured us more in the drivers seat.

On Saturday, Football, Soccer, Soccer, and Field Hockey all played Bowdoin, coming away with 3/4 WINS.  At halftime of the football game, our President Laurie Patton honored our women's lacrosse team by presenting them with their National Championship rings, and then we finished off the day with a 3-0 sweep of St. Lawrence where Beth made her first appearance on the court, which was great.  She got immediately in on the action blocking a ball back and recording a dig. 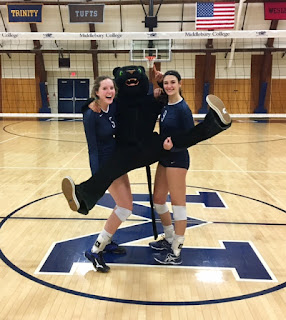 The Panther made an appearance at our game on Saturday, which was FUN!  Love the Panther (and who was in it!)  We had an alumnae game, sort of, in the morning before all of the other action outside, but it was a gorgeous day for all of the activity, and then we had a quick pizza party after our match with some of our alums and the team.

Last night, we bested Colby-Sawyer in three straight sets in just over an hour, which was good to see.  Becca and Sarah both had zero error nights with 10 kills on 25 swings for a .400 hitting %, and 6 K on 10 swings for .600 respectively.  Alice also had a zero error night with 2 kills on 4 swings in only a few rotations for a very efficient night!  Mel led the team in blocks with 4, while Isabel and Sarah both chipped in 2.  Hannah returned to the court partially, which was great to see, and Chellsa continues to run the offense and lead the team in service aces! 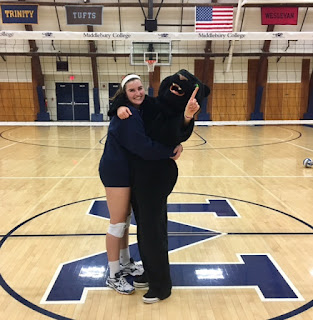 We're off to New London, CT on Friday night to face off with Conn College as our lone Conference match this weekend.  We'll then head to Boston to play both UMass Boston and Babson.  It should be a great weekend of volleyball as UMass Boston is currently ranked 1st in New England, and both Conn and Babson are in the top 15.  We're excited to play some of the region's best and see where we stack up!  Let's GO MCVB!!
Posted by sjr at 8:54 AM No comments: 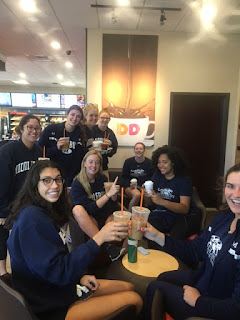 We had our first weekend trip with our full team, which was nice.  We headed to Hartford, CT to play Trinity on Friday night and Wesleyan on Saturday afternoon.  We arrived early at Trinity, despite trying to leave at the right time, allowing everyone to stay in class and get lunch beforehand, but it was fun stretching our legs walking around the campus before having to play.  Our only freshman to play this weekend was Chellsa, who started her college debut with a service ace, which was fun to see, and we tested out our 6-2 offense.

I felt we had a very good first NESCAC match, meaning it was close and we had to stay composed and come from behind in at least one set to pull out a win.  The 2nd set went to extra points before we got the win 27-25, and in the 3rd set, we got out to a large lead, but in typical NESCAC fashion, Trinity stormed back and made the third set a hard fought battle.  We regained our control and pulled out the straight set victory with a 25-20 final set score.  Our hitting % was .309 as Mel, Alice, Isabel, Sarah and Eliana were all over .300!  Here's the link to the Trinity Stats. 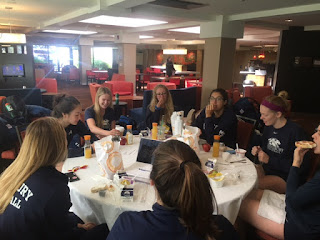 The hotel was very nice, and playing at 2pm Saturday allows us a relaxing start to the day after being able to recover and sleep in a bit also.  We found a DD, which is always fun, and we got a short walk in to get there, so that was nice also.

Wesleyan proved to be a tough contender as we played our first 5 set match.  We're still finding our groove, which looks good at times, and needs polishing at times, which is to be expected this time of year.  Looking at the game metrics, it was a very even match minus one stat:  blocking.  Here are the Wesleyan Stats.  They seemed to have our number a bit, which forced our hitters to find other options--a very good exercise, which we definitely improved upon as the match progressed, but not quite enough to pull out the victory.  As long as we learn from this setback, we'll  keep improving and keep moving forward, which is our daily goal!

We'll continue our quest at improvement this week with a full week of Home Volleyball.  We're back on the court Wednesday for our Home Opener against St. Mikes at 7pm, and again on Friday night at 8pm vs Hamilton, and Saturday at 5pm vs St. Lawrence.  If you're in the area, come on out to see us play all week in Pepin Gymnasium!  Homecoming is Saturday, so there are fun activities all weekend long both in the Gym and all over campus!  Come join in!
Posted by sjr at 10:09 AM No comments: 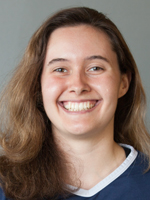 Senior Melanie English was recently elected to Phi Beta Kappa based on her work through junior year.  This a very distinguished academic honor, and we are very proud of our Mel!  Only 13 seniors were elected, 5 of whom were athletes. 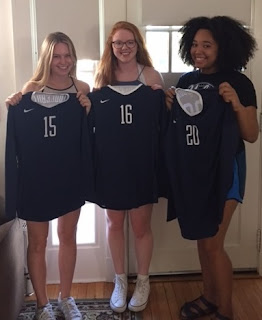 In a team ceremony yesterday, the captains welcomed our newest team members by presenting them with their MIDD Jerseys!

#15 is Gigi Alper, a defensive specialist from Mill Valley, CA.  She is the younger sister of Lauren Alper '16 for those that know our Program history!

#16 is Beth Neal, a right side hitter from Franklin, MA who is also planning on joining the Track and Field team here at MIDD.

#20 is Chellsa Ferdinand, a setter from Queens, NY who was already featured in a post on our instragram from this summer along with Gigi for their spring/summer volleyball endeavors with club/beach volleyball! 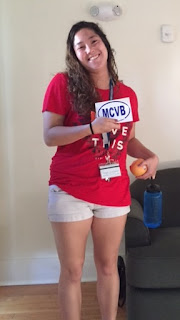 Lastly, pictured to the left we welcome our Team Manager, who is from CA and was a February Freshman last year.  While this will be her second semester at MIDD, it'll be her first Fall with us!  She's already figured out how to use the iPad for our stats program, and will be traveling with us when she can, which will be great.  She helps out a ton in practice tossing balls, keeping score, and taking stats!

WELCOME you four!!  We're excited to get started this weekend, and are sorry that our Freshmen can't travel with us, but they'll be off having fun with Orientation activities of various kinds! 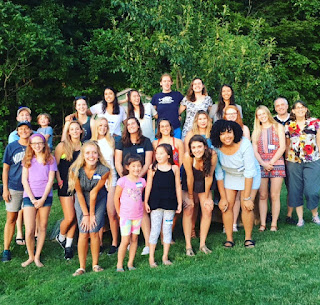 The 2016 season has begun, and I'm already behind on my posts!  I'm going to recap all of pre season right now, and then hope to keep everyone caught up on our season going forward.

We're also posting on instagram @middvb, and also Facebook on a page titled Middlebury College Women's Volleyball, so when I figure out how to properly link them all in one place, I'll get those links here on the Blog for easy access to all things MCVB!

Our season started on August 29th when everyone moved in, and we gathered for the first time at my house for the season opening Team BBQ! We were missing Claire, who had RA duties that day, but were joined by our Faculty Affiliate, Pat Manley, and our Trainer, Judd Mackey and his family, some of whom made the picture.  I think only one of my kids actually made the picture (Lois), and neither of Brian's girls made it as they're all (except for Max) teenagers now! 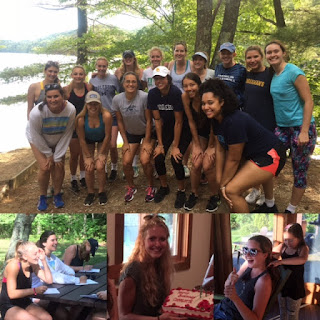 After the BBQ, we had a day of "administrative details" where we sign forms, do some team bonding activities, and talk about things we need to talk about, ranging from team expectations, goals and team culture,  to anti-hazing, NCAA forms, Green Dot, and the campus culture.


And, then, we started practicing, which included several days of double sessions, and some extra "fitness" which may or may not have included running hills and resting in cool mountain streams.  Doubles culminated last night in an inter-squad scrimmage. 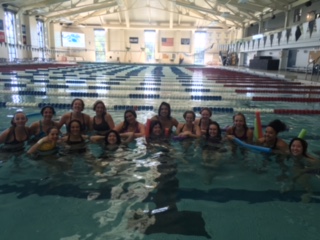 Today was the first real day of not having double sessions, so we celebrated with a shorter practice followed by a "lollygagging session" in the pool!  This of course included spelling out MCVB by both floating (which wasn't as readable from above), and then mostly standing to form the letters, which was much easier to read.  There was some "Martha Washington" hairdos and some diving in the deep end that didn't make the team blog, but I think the pool session was a very positive and needed break! 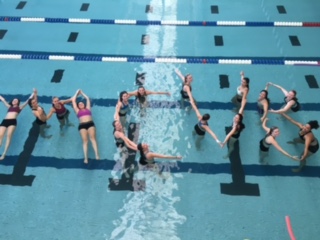 We're headed to Union College on Friday to play four matches (SUNY Oneonta, Skidmore, Union and Susquehanna).  Unfortunately, we won't have our freshmen with us as they finish up Orientation with trips of various kinds this weekend, but then we'll all be back together for a week of practice before our first NESCAC weekend on Sept. 16-17.