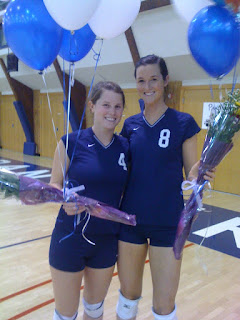 It was nice to have a couple of days off from class on Monday and Tuesday, but we couldn't take time off from practice. Our last regular season home match, and Senior Night was Wed. night against the Panthers of Plymouth State University. We started off the night by introducing our two seniors, Lauren and Whit, both of whom own school records. Whit holds the single-match record for total blocks, and also is 4th on the all-time hitting % list at MIDD. Lauren already holds the records for total assists in both a career, and in a single season, with 4 matches left in the regular season. In addition, as you might imagine, she also holds the assists per game records, and currently is ranked among the top 3 in the Conference in assists per game.

It was nice to see Whit back in the lineup after some trouble with her ankle, but she ended up leaving after another tweak, so we're hoping that that heals up here very soon. Caroline wasn't with us due to her concussion, but we're hoping she's back soon as well.
We got off to a great start, and completely dominated the "other" Panthers in the opening set. We served well, and they were making unforced (and maybe some forced) errors all over the place. In the second set, Plymouth started to find their game, and challenged us to step up to that. Our serve receive was a little shaky, and we tried both MJ, and Meg back row to try to settle our recieve. They had a couple of outside attackers that started to put the ball down, and we didn't quite adjust to it quickly enough to pull out a very tight game 2, 24-26.
After that, the last two games were pretty close, back and forth, but we managed the last run, and pulled away late in both sets to win 25-22, and 25-19. MJ, and Julia led our offense with great hitting nights. MJ had 15 kills with only 2 errors on 27 swings for a .481 hitting %. Likewise, Julia had 14 kills with only 3 errors on 34 swings for a .324 hitting %. Jane also had double-digit kills with 10.
Caitlin led the defense on the floor with a 20 dig night, but both Maddie and Elissa had 3 solo blocks to help that defensive effort at the net. Julia had a very well-rounded game with 4 service aces and 6 digs to go with her stellar hitting, and Lauren ended the game with 40 assists.
It was a good challenge mid-week leading up to our weekend at the Hall of Fame Tournament where we're seeded #1 in the Gold Bracket and will play some of the best teams in New England, starting out with MIT on Friday night.
Posted by sjr at 11:08 AM