Our first of two home NESCAC weekends got off to a great start on Friday night beating a very tough Bates team in 4 sets.  Early in the first set, Becca eclipsed the 1000 Career Kill mark to become only the 5th player in Program history to do so, which prompted a quick "Becca" chant from the crowd after it was announced between sets!  And, it was Brian's birthday, so we got to celebrate after our win with cake, too. 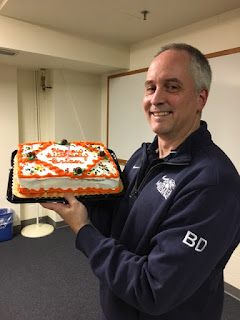 On the evening, we needed to come from behind in every set to win, and we showed a lot of composure in doing so.  In the first set we got behind early 4-8, but then tied it up at 14-14.  We then took a small lead, and then traded points before going up for good at 22-21 and finished out the first set 25-23.

The second set was back and forth again through 9-9, but then they took a 10-15 lead which they held until we were able to tie it at 19-19 and held that lead for a 25-22 second set win.  The third set was more of the same.  They scored the first 4 points, and we scored the next 5.  After trading points for most of the rest of the set with only small runs by either team, they went ahead for good at 19-20 and closed out the 3rd set 21-15.  The fourth set had 12 tied scores with neither team really able to pull away from the other.  Tied at 20-20, we took our final lead that we wouldn't let go of 21-20 on a kill by Alice, followed by a service ace from Becca and we went on to win the match 25-22.

It was a great match, and we showed a lot of poise and composure in competing, and we talked about this after the Amherst match this year also--this is NESCAC!  There are going to be a lot of matches like that, and we need to embrace the challenge and enjoy it!  We are tracking our team goals each game, and we're doing a great job of hitting these goals.  We keep moving forward and striving for these goals, and if we fall short of one, we just keep pushing for the next one, and having fun in the meantime.

Saturday proved to be a different story.  Colby came out and fought hard early in the match for a 7-7 tie, but then we pulled ahead 20-10, to finish out the set 25-13.  Each of the three sets had exactly the same score, with a similar story.  Eliana finished with a .647 hitting % on 11 kills from 17 sets, and Becca hit a .458 with 11 kills, no errors on 24 swings.  Isabel and Sarah both hit .333 with 8 and 7 kills respectively.  Eliana and Sarah both had 4 blocks, with Jaime and Emma both recording 2.  Emma continues to run the offense, and currently sits at 2nd in the Conference with 10.38 assists/set.  It was a balanced afternoon with everyone seeing playing time and contributing to the win!

With the latest Conference stats being posted, Sarah and Eliana sit 2nd and 4th in hitting %, Emma is 2nd in assists/set, and Becca and Isabel are 2nd and 5th in kills/set.  We have a very tough October coming up, and we're excited to start it at home again this weekend when we play both Conn and Wesleyan.  We'll celebrate Senior night on Saturday afternoon when we play Wesleyan since our last home regular season match will be the following wednesday.  In the words of Gabi..."Let's GO!!"
Posted by sjr at 9:02 AM