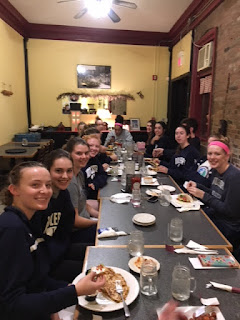 After a tough Conference Weekend two weeks ago where we lost to both Tufts and Bowdoin, we rebounded well to take two wins from Regionally ranked foes Babson and Springfield this past weekend!  We ended up dropping our final match of the weekend to MIT, who's currently ranked #15 Nationally, but we felt good about our level of play over the course of the weekend.  Isabel was named to the All-Tournament team for her efforts, totaling  34 kills and hitting .245 against 3 ranked teams, so great job, Isabel!! 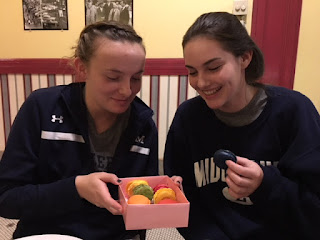 In my opinion, we started out slowly, despite the win against Babson, but we kept upping our game over the weekend, and had possibly our best overall performance really, against MIT.  Babson was very back and forth pretty much the whole first half of both of the first two sets, but we pulled ahead on late runs both times for a 2-0 lead heading into the 3rd set.  Babson lead most of the 3rd set until we tied it at 17-17 and traded points until a service ace gave us match point, followed by a service error, which tied it at 24-24, and then two straight kills by Babson extended the match.  The fourth set we got behind again early and tied it at 17-17 again, only to go down 21-23 before making a final push to tie it up at 23-23, and then two errors by Babson closed out the set and match win! Afterward, we went out for a sit-down dinner, which was a nice change from our weekend picnics!  Chellsa's dad brought some yummy and colorful macaroons, too!

On Saturday morning, we stopped for our favorite pre-game Dunks fix before heading to the gym for a full day of volleyball. 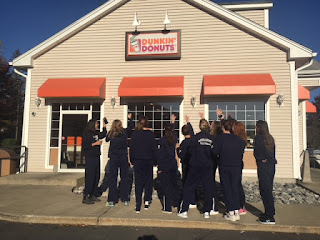 After a back and forth start that saw us tied 8-8, Springfield jumped out to a 15-8 lead, and looked like they might run away with the first set.  We fought back with a 5-0 run of our own to close the lead to 23-20 before they closed it out 25-20.  We were down early in the 2nd agin, and trailed by at least one until a 16-16 tie mid way through the 2nd set.  We got behind again 21-19 but rallied to tie it and finished it in extra points, winning 27-25.  The third and fourth sets were back and forth again, but with us holding the edge most of the time by 1-6 points and closed out both sets for a straight set win after dropping that first one. 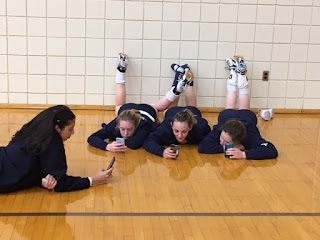 There was a nice break between matches on Saturday so everyone could get food and rest between matches, which was nice also.  The final match of the weekend we were up in the old gym at Williams, but it was much quieter with only one match going on, and we could at least hear each other talk on the court, which was a nice change from the very loud main gym with two matches going on side by side. 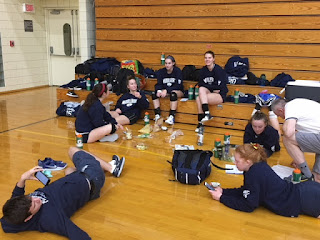 The first two sets were very close until the mid-way point when MIT started to pull away a bit, but we were hanging in there and serving tough and receiving well, and getting some offense going, which was great.  In the 3rd set, we were behind early until we tied it up at 7-7 and never looked back, taking leads of 12-7, and 18-11 for a 25-15 finish in set 3.  The final set was again back and forth until about 16-17 and they went on a couple of runs to finish out the 4th set and match 25-18.  Overall, we blocked pretty well against a big MIT team, with Alice, Sarah and Eliana all having 4 Block Assists.  Although our team hitting % was lower than our average, Alice hit .500, Becca hit .250, and Isabel hit .229, so those were some good stats also.  Shea had a great weekend serving a total of 6 service aces in the MIT match alone, and had 12 total on the weekend!

Our weekend concluded with a yummy Thai takeout dinner outside of the gym, which we all enjoyed!  We do love our food.  Fall Break is Monday and Tuesday this week, hopefully giving us a nice break from mid-terms as we prepare for our final NESCAC weekend facing Hamilton and Williams.  LETS GO MIDD!!!
Posted by sjr at 11:44 AM