We were on the bus for almost 6 hours, through the driving rain and arriving in the dark, but we managed to get there earlier than we had the last time we traveled to Bowdoin for the NESCAC Tournament.  Two years ago we had this same situation, heading to Bowdoin for the NESCAC's, playing Tufts in the 8pm Quarterfinal of #4 vs #5, but we arrived with only about 45 min on the clock before match time.  All's well that ends well, and we prevailed that night, but all the same, we were happy to arrive on time this year! 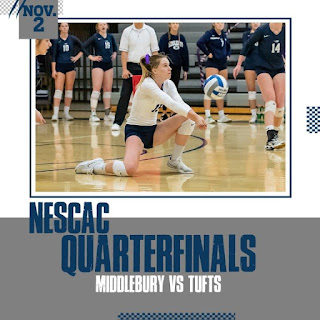 As the NESCAC does before the tournament, they like to put out the stats on each team, and not just the stats, but the history.  For example, they reported that we were vying for our 6th overall Championship while Tufts was searching for their elusive 2nd one.  We entered the tournament holding a 4-0 edge over Tufts in Tournament play (which I had to rack my brain to remember, but we'd beaten them twice in the finals, once in the semi-finals and once in the quarterfinals.)  Anyway, it's all academic until the match starts, and nothing matters but how you play that day!

At 8pm, our match started in the upper gym at Bowdoin Friday night.  We played them very evenly during the first set, which saw them play much better than they had the first time we played them at home.  They were passing better, and serving tougher and the match was a very even one, even though we didn't feel as though our game was as sharp as we'd like it to have been.  We weren't controlling the action as we had when we played them at home a couple weeks beforehand, but it was a very competitive and evenly matched contest, as you'd expect in the Tournament.  That first set was as tight as any we've played all year with no team having more than a 1 or 2 point lead the entire set, which took extra points to be decided, unfortunately for them.

I went into the huddle between sets thinking no worries, this is what the tournament is all about, and we just needed to do a few things a little better.  Our blocking was actually pretty good in that first set, and we were following our game plan pretty well, again, just needing to execute a few things a little better.  Tufts was riding the wave of having won that first set, pulling it out at the end in extra points and we just needed to stay strong mentally ourselves to push through and fight.  The second set was still very close, but we seemed to be behind by a couple of points most of the set instead of trading points and leads back and forth. We got behind 4 points at 16-20, but then closed the gap to 2 at 19-21, but couldn't seem to come up with points when we needed them and lost the 2nd set by losing the last three points on a service error, a receiving error and then a kill by Tufts.

That seemed to be indicative of our destiny that day.  Although we did fight for what would turn out to be the final set, we had way more errors than we'd been averaging for the season with one of our lowest hitting % nights and a 2-1 service error-ace ratio.  When we tied the score at 10-10, that would be the last time we were even.  We hung in there only behind by 1-2 points for most of rest of the set up to trailing 17-19.  Tufts final push of 6 unanswered points put the nail in the coffin for us and ended our season.  During the night, we saw two of our players be helped off the court with injuries, which is never a good way to go out, one late in the 2nd set, and one late in the 3rd.

It's always disappointing to end the season on a loss, which happens to everyone in the country but ONE team.  When the dust settles, I think we'll all look back on this season with fond memories and with good feelings.  It was a successful season for sure, and we ended up being ranked in the top 10 in the Region and were getting votes for top 25 in the Country, which is new for us, so that's a good sign moving forward.

The light didn't take long to shine on our team again as both Sarah and Isabel were named to the ALL-NESCAC 1st Team, which is a great honor with the depth of talent in the Conference!  Congrats to both of them, and to the team that supports them!  Well done, MCVB!!  Sarah was also named to the All-Sportsmanship Team for NESCAC!
Posted by sjr at 3:45 PM

The ONLY Proven 3-Step Jump Training Program That Adds AT LEAST 9 – 15+ Inches To Your Vertical Jump… In Less Than 8 Weeks.
http://bit.ly/2Wnbl3e