We traveled down to Conn College on Friday night to take on the Camels.  The first game started out fairly well as we edged out to a lead of as many as 8 points at 18-12, but would see that lead slip away half on our errors, and half on their good hits.  Tied at 18-18, we scored the next two points to again take a small lead, but Conn tied the score again at 21 all.  Tied 23-23, we ended that set on an attack error, and a receiving error.

The second set we came charging back, took control from the start, and never looked back to win 25-12.  We seemed to be back on track, however, that was somewhat short lived as we managed to lose both of the next two sets despite being very close right up to about 20 points.  It was a pretty ugly game altogether, actually, as neither team mustered a good hitting %, and both teams were plagued by unforced errors.  MJ and Amy were again our kill leaders, but Gabi came through with the highest hitting % at .571 with 4 kills, no errors on only 7 swings.  There were very few blocks in the game on either side, and both teams combined for 21 service errors, and 20 receiving errors, split almost evenly between the two sides.

As always happens, the day eventually ends, and a new one greets us the next morning, full of new hope and inspiration.  We set out for Tufts early, expecting a lot of traffic due to the Head of the Charles, and ended up arriving even earlier than we normally do.  No worries, we had a short team meeting to help make sure we have the big picture in mind, and to refocus our energies, and remind us why we play this game, and how much fun we all have together.  Anyway, it was a gorgeous Fall morning, and some of us watched the Tufts baseball team playing pickup, and part of a Quidditch match starting up, so it was nice to get some nice outside time before heading in for our match.

The energy on the court seemed alive today, and we were determined to find our fight!  And, fight we did.  We pulled out a very tight first set 26-24.  No one held a lead of more than 3 points the whole set, and it was great to see us fight right to the end.  The second set we got behind early, and while we fought to get back into it, they pulled away with a 5-0 run to end the set 25-15.  The third set was again very close to start out, and with us up 13-10, we traded points to 17-14 and then we rattled off 6 straight points to go up 23-14, and then finished the set on two attack errors by Tufts.

Now, up 2-1, the 4th set was a great battle.  Tufts got ahead by a few points early, and then we'd come back.  They did it again after being tied at 9-9 to go up 14-18 on us.  Again, we fought back into it to tie it up at 19.  We traded points, being down a set point here, and up a match point once that we couldn't quite convert, and they managed to pull out the tight win 25-27 to force a fifth set.  We got off on the wrong foot in the fifth with some errors and poor passing to go down 0-3, but managed to get it back and tie it at 4-4.  Unfortunately, that's where our scoring stalled as they went on a 10-0 run to take a gargantuan lead 14-4.  Two time-outs, a side change at 8-4, and we just couldn't manage to get the sideout.  We had some great swings that just went wide, a couple of good blocks that we just reached a bit for and got tooled etc.  We managed to get two points before a service error ended the match, and our hopes of the upset. We were plagued by errors of all kinds a bit in the last set as we had a few receiving errors, some blocking errors, hitting errors, and service errors.  That's a few too many errors to overcome, I'm afraid. 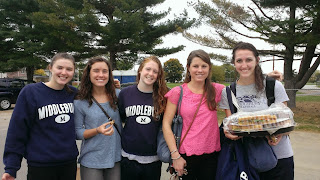 The good news was the fight was back in us, so we'll get back to work next week on the physical errors, and keep pushing ahead!  We did have several fans in the house, which was very fun.  We had our senior parents there--all 6 of them, actually, plus Meg's grandparent, which was fun.  The Jarchows, the Harts, and the Andersons have been great supporters of ours for so long now, and we thank them for traveling all the time to see us, and support us.  I think Katie's dad was there also, or at least at Conn when he brought us cupcakes!  I hope I didn't leave anyone out because I didn't get a chance to talk with everyone.

The Barretts were back in the stands, and recent grad Caitlin '12 came to sit on the bench and help cheer/support us, while sister Lauren '10 was in the stands with her parents Tim and  Lisa.  It was great to catch up with them, and we even had a bus delivery for old times sake!  Yes, sandwiches for all, AND carmelitas!!  Oh la la.    Katie Kenny Enslin '03 was also there with her husband, two adorable children and both of her parents (who are some of our biggest fans in the Boston area.)  Katie commented on how good the team looked, and how rewarding, but tiring being a parent of two small children can be!  Amen to that one.  Thank goodness mine are getting older!  :) 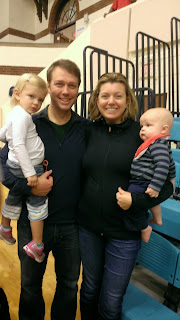 After the match, the juniors stayed behind to go cheer for our crew team at the Head of the Charles race this weekend, and Lauren and Meg stayed behind to go home/see friends in the area.  We are off of school on Monday and Tuesday, so at least they'll have some time to get caught up on work, and sleep, and hopefully have some extra free time to just enjoy doing whatever!!  We'll get back to work together on Monday and Tuesday before heading over to Plymouth State on Wednesday and then to the Hall of Fame next weekend.