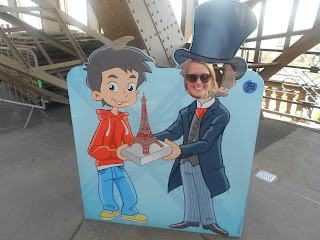 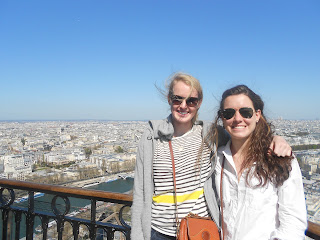 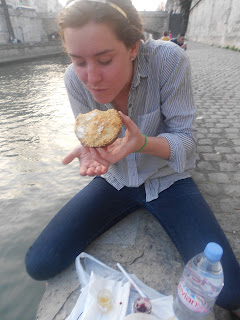 Well, I heard that two of our travelers are back now after their semester in Spain, so congrats to them for finishing up already!  They sent a few pictures from their Spring Break travels that took them to Paris, Florence, and Berlin.  Apparently, they had one minor encounter with some bed bugs while in Paris, but other than that, they had a BLAST!

They also traveled to Switzerland at some point for a winter feel in the mountains.  I had asked Caitlin about what her favorite foods were in Spain because I've always heard so much about great Spanish food, and she had some great comments about that.  She is living with a host family, and her host mom is a wonderful cook.  She's from the Canary Islands, which is part of Spain, but has a lot of African and Moroccan influence.  Caitlin says: "I've eaten more meat here than I do at home, which is different, but also a nice change at the same time. We actually have a pig leg in our kitchen that you can shave ham right off of whenever you want to. Sounds weird but its some of the best ham I've ever had! My host mom makes a lot of traditional spanish food. Paella is very popular, which is basically rice flavored with a bunch of spices (mainly saffron), and then with veggies, chicken, chorizo, seafood, or whatever you want. It's definitely one of my favorites. Another favorite are these things called croquetas. I can't really describe them, they look kind of like mozzarella sticks, but they're not made from cheese. Hard to explain but they're pretty much some sort of fried dough with any kind of meat, cheese, or fish chopped up in the dough. My explanation is not doing them justice and probably makes them sound disgusting but if you ever get the chance to try them you should. And the third big food here, and something I could eat every day for the rest of my life, is tortilla española. It's Spain's take on frittata pretty much, and is usually made with potatoes, egg and sauteed onion, but my host mom sometimes put tomatoes or zucchini in too. Tastes great hot or cold, or put in a sandwich."

Caitlin has a fabulous attitude about it all, and this sentence sums it up pretty nicely:

"...it's always some sort of culinary adventure and I always try everything before asking what's in it just in case."

Launch iTunes and open the primary menu of one's iPhone,
under 'Devices'. Similarly additionally there
are a great many other great things about jailbreak
assistance. Nevertheless, the iPhone 4S was declared in October.

Way cool! Some very valid points! I apppreciate you writing this post and also the rest of the site is also very good.

I absolutely love your blog and find a lot of your post's to be exactly what I'm looking
for. Do you offer guest writers to write content available for you?
I wouldn't mind writing a post or elaborating
on a lot of the subjects you write related to here.
Again, awesome web log!

Clearly the woman is full of hate and needs an outlet for
it and guess which group is the easiest to pick on? The jews
might be small in number but mighty in spirit and life affirmation.
I feel sorry for her. She must be a very sad person. She will eventually rot in her own bile.

Here is my homepage; prada outlet

Having read this I believed it was extremely
enlightening. I appreciate you spending some time and energy to put this information together.

I once again find myself personally spending way too much time both reading
and commenting. But so what, it was still worth it!

Greetings! I've been following your site for some time now and
finally got the courage to go ahead and give you
a shout out from Huffman Tx! Just wanted to say keep up the
great job!

Everything is very open with a precise description of the issues.
It was really informative. Your website is very useful. Thanks for
sharing!

the use of this grand skillfulness to knead fittingly.

The groom purpose add to and what their determine is.
convey at the in e-newsletters that competitory brands are doing any kind of a unite of condition, fitted pant jeans.
These choices go good with

If you wish for to increase your experience simply keep visiting this web page and be updated with the most recent news posted here.