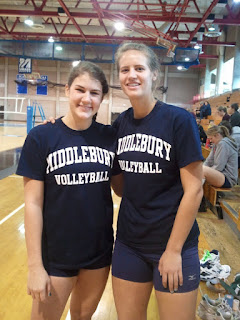 Jane and Elissa were invited to play in the NEWVA Senior Classic by being honored as two of the top 30 seniors in New England. That day was this past Sunday. They took to the court one last time together as over 25 young women competed in different skill games, and then competed in an actual match. I think they may not have come out on the winning team for the match, but they did come away with a nice honor. Jane and Elissa placed #1 and #2 in the Queen of the Court competition! How fun! Well done, guys. They scored it how we sometimes do in practice where you end up competing on many different teams, but the individuals with the most points scored on the "Queen" side win. 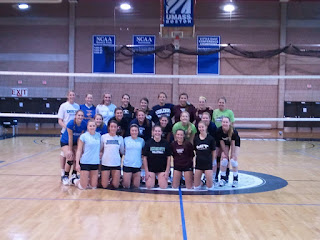 It was a very nice event, and a nice culmination of a career playing against many of these girls. They didn't know all of the girls, but many of them they'd played against at least once, and several many times.
Posted by sjr at 6:50 PM